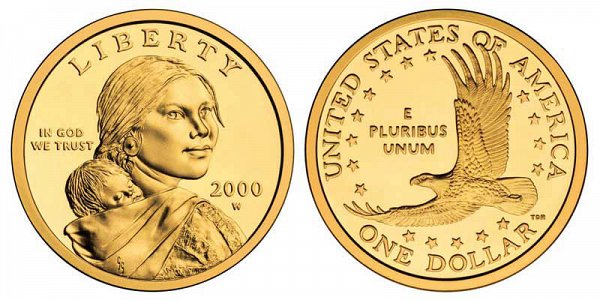 One very rare and special variety is the 2000 W Sacagawea Dollar. Unlike the normal dollar coins of this year that have a golden "look" - This variety really is 22 karat gold which was struck on the same planchet as the $25 half ounce gold quarter eagle. It has a composition of 91.67% gold along with 3% silver and 5.33% copper as does the gold eagle. It also has a slightly larger diameter of 27 mm. This coin was produced early on - so it has the boldly detailed eagle feathers that were featured on the extremely rare Sacagawea "Cheerios Dollar". Only 39 proof coins were struck at the West Point Mint and bear the "W" mintmark on the obverse.

The US Mint originally planned on producing more of these special coins to sell to the public and to collectors. Although the plan was abandoned and all of the coins were destroyed except for 12 coins. These very same 12 coins were brought aboard the Space Shuttle Eileen Collins and flown into space - guided by Eileen Collins who was the first female commander. After the coins were returned - They were displayed at museums across the country. The Mint still had plans to strike gold collector coins with either a $1 or $5 denomination - but the plan was eventually scrapped. In September 2001 - The only 12 coins were relocated to Fort Knox Gold Bullion Repository and stored there. This special coin was produced by the US Mint but was never issued to the public.