There were multiple varieties of the 1798 Draped Bust Dime. Two of them are 1798/7 overdate errors where the 8 is stamped over the 7 in the 1798 date. The difference between these two varieties deals with the number of stars above the eagle's head on the reverse of the coin. One variety will have 13 stars and the other will have 16 stars as depicted above in the example comparison image.

The other two major varieties deal with the size of the "8" in the 1798 date on the obverse of the coin. One has a small 8 and the other has a large 8. In addition: both of these varieties also have differences on the reverse of the dime. The small 8 variety will only have 4 berries in the branch that the eagle has in its claw while the large 8 variety has 5 berries. These differences and comparisons between the 1798 large 8 vs small 8 draped bust dime can be seen in the example images below. Source of example images are courtesy of Heritage Auctions. 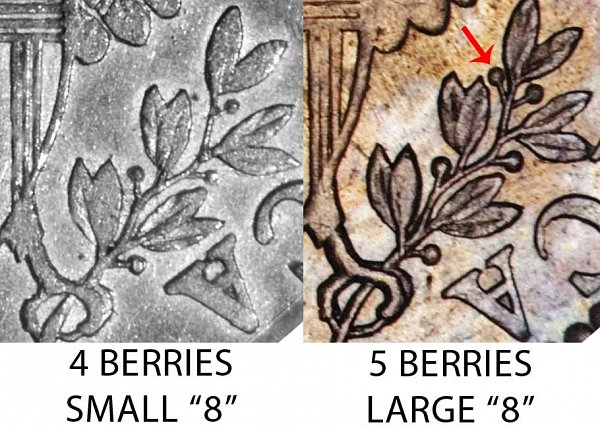