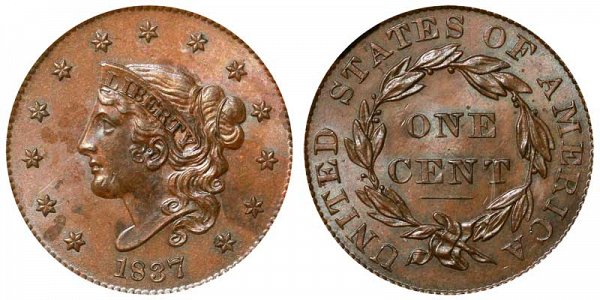 One major variety is the 1837 Coronet Head Large Cent (Penny) featuring the medium sized letters on the reverse and the "Head of 1837" with plain cords in lady liberty's hair on the obverse of the coin as depicted above.

The difference between the small letters vs medium letters on the reverse of the coin is depicted in the example comparison image below. Note the size of the letters and the spacing between them: 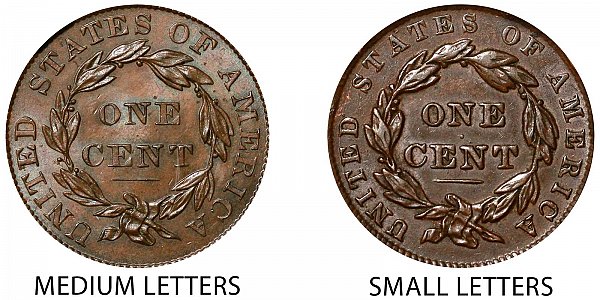 In addition: Another difference deals with the portrait of liberty on the obverse of the coin. The "Head of 1837" liberty features plain cords in the hair whereas the "Head of 1838" features beaded cords. The differences are depicted below in the example comparison image: 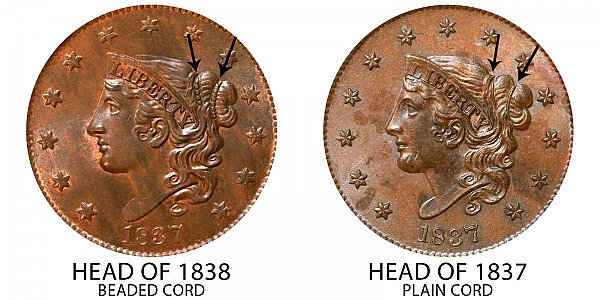 USA Coin Book Estimated Value of 1837 Coronet Liberty Head Large Cent (Plain Cord - Medium Letters Variety) is Worth $28 in Average Condition and can be Worth $399 to $607 or more in Uncirculated (MS+) Mint Condition. Click here to Learn How to use Coin Price Charts. Also, click here to Learn About Grading Coins. The Melt Value shown below is how Valuable the Coin's Metal is Worth (bare minimum value of coin). Click here to see the Melt Value of every US Coin.