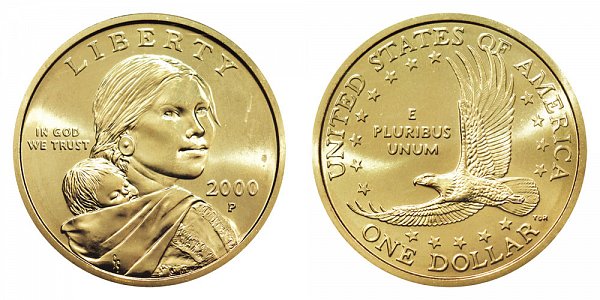 This is another very rare variety of the 2000 P Sacagawea Dollar - known as the "Cheerios Dollar". The story behind this coin is one of the most interesting of all US coin discoveries.

In late 1999 and early 2000 - The US Mint was working with businesses such as Walmart and Sam's Club to help promote and distribute the new 2000 "golden" Sacagawea Dollar coins. The General Mills cereal company also began participating in the program by putting a year 2000 Sacagawea dollar in 1 of every 2000 boxes of Cheerios cereal.

Numismatist Tom DeLorey examined one of the examples of the new Sacagawea coin in Fall of 1999 before the general release of the coin. He noticed what he thought was only 12 tail feathers on the eagle on this the example coin and also noticed that the coins for general circulation looked like they had 13 tail feathers on the eagle. Years later in 2005 - the designer of the reverse of the coin (Tom Rogers) explained that the eagle always had 12 feathers but the appearance of the feathers were changed slightly. In fact - It turns out that the earlier coins from 1999 were actually pattern coins which had more highly detailed tail feathers!

Tom Delorey had a theory that General Mills needed to have these Sacagawea coins early in Fall of 1999 so that the coins could be placed in special holders and put in Cheerios cereal boxes so they could be distributed to grocery stores early in 2000. This would make perfect sense due to the fact that the US Mint would have had to use the 1999 pattern design to produce those coins early before the design changed. As it turns out - most (if not all) 2000 Sacagawea Dollars that were placed in cereal boxes are actually all pattern coins - now known as "Cheerios Dollars" - with the boldly detailed tail feathers!

It's very likely that people found these coins in their cereal and they either went directly into circulation or they were tossed into a "souvenir" drawer or trinket box at home! These coins are worth hundreds of dollars in uncirculated condition. If the coin is still in original packaging or well taken care of - It is highly recommend that these coins be sent to a professional grading service. High grade coins in MS-67 or MS-68 grade are worth $10000 up to over $30000 each! It is estimated that only 5500 of these coins exists but no one knows for sure.

Depicted below is an example closeup image comparing the difference between the Sacagawea normal dollar vs cheerios dollar: 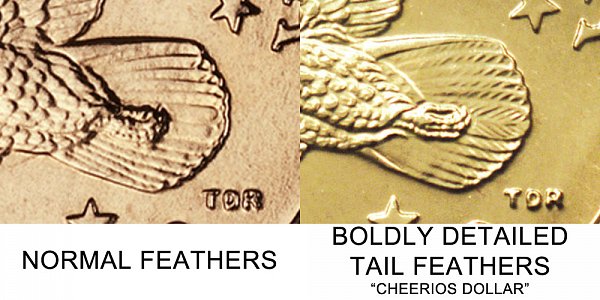