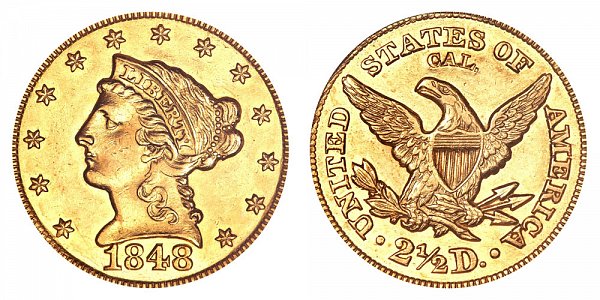 One major variety is the 1848 CAL. Liberty Head $2.50 Gold Quarter Eagle. This is an extremely special and rare coin related to the California Gold Rush.

A man named James Wilson Marshall first found California gold at Sutter's Mill on January 24th of 1848 - which later resulted in the massive gold rush shortly thereafter. Later that year in December - the Secretary of War (William L. Marcy) received 228 ounces of newly minted California gold from the Military Governor of California (Col. R.B. Mason). Marcy then had the gold transferred to the Philadelphia Mint with the instructions to use this gold to produce Congressional Medals for military General Zachary Taylor and General Winfield Scott. Any gold that was left over was to be used to produce gold Quarter Eagle coins - which bear the letters "CAL." just above the eagle on the reverse of the coin. "CAL." signifies that this gold came specifically from the California gold rush. An example of this coin is depicted above. Source of example image is courtesy of Heritage Auction Galleries.

USA Coin Book Estimated Value of 1848 Coronet Head Gold $2.50 Quarter Eagle (Cal Variety) is Worth $39,166 in Average Condition and can be Worth $96,644 to $141,237 or more in Uncirculated (MS+) Mint Condition. Click here to Learn How to use Coin Price Charts. Also, click here to Learn About Grading Coins. The Melt Value shown below is how Valuable the Coin's Metal is Worth (bare minimum value of coin). Click here to see the Melt Value of every US Coin.