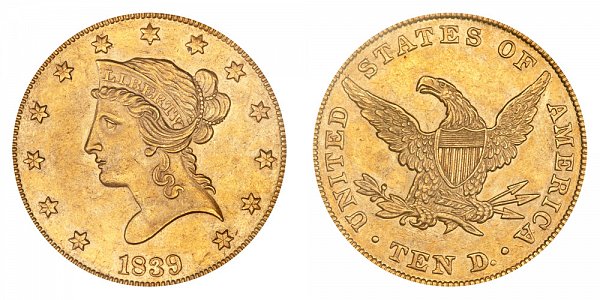 There were two major varieties of the 1839 Liberty Head $10 Gold Eagle. This variety used the older style liberty head on the obverse - known as the Type of 1838 - and also larger letters on the reverse of the coin (as depicted above).

The 1839/8 (Type of 1838) is easily distinguishable from the 1839 (Type of 1840) design. The old style liberty head is tilted downwards making the date appear more to the left of the liberty. The old style liberty features a narrower and sharper curve at the bottom-right portion of the liberty bust and also the ear is covered a bit more and in a different style. The new style liberty (Type of 1840) is aligned with the date and the bust is tilted upward more. The bottom-right curve on the liberty bust is shorter and wider - with less hair covering the ear and in a different style. This is the design used on all liberty head $10 eagle coins in 1840 and subsequent years. The difference between the Type of 1838 vs Type of 1840 is depicted below (Source of example images is courtesy of Heritage Auction Galleries): 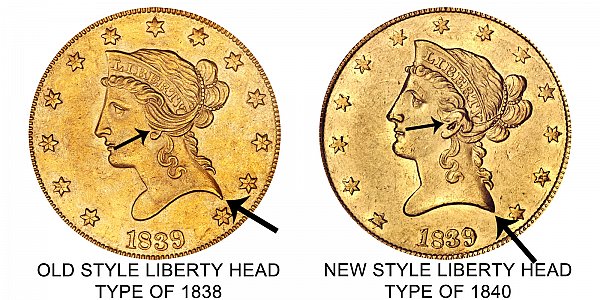 In addition: The older "Type of 1838" features slightly larger and taller letters on the reverse of the coin - while the newer "Type of 1840" coin features smaller letters. The difference between the Large Letters vs Small Letters is depicted below in the example comparison image (Source of example image is courtesy of Heritage Auction Galleries): 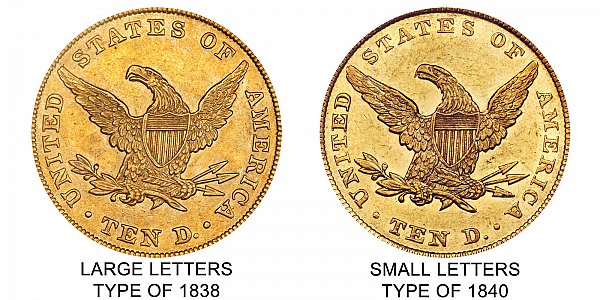 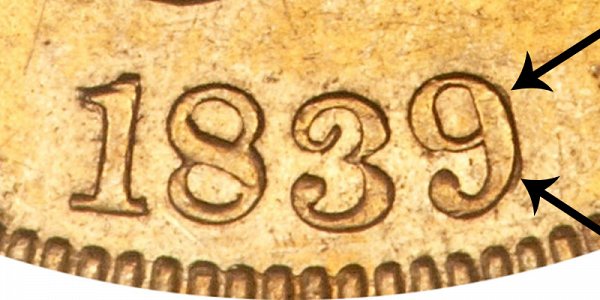 USA Coin Book Estimated Value of 1839 Coronet Head Gold $10 Eagle (Large Letters - Type of 1838 Variety) is Worth $1,914 in Average Condition and can be Worth $36,546 to $89,851 or more in Uncirculated (MS+) Mint Condition. Click here to Learn How to use Coin Price Charts. Also, click here to Learn About Grading Coins. The Melt Value shown below is how Valuable the Coin's Metal is Worth (bare minimum value of coin). Click here to see the Melt Value of every US Coin.