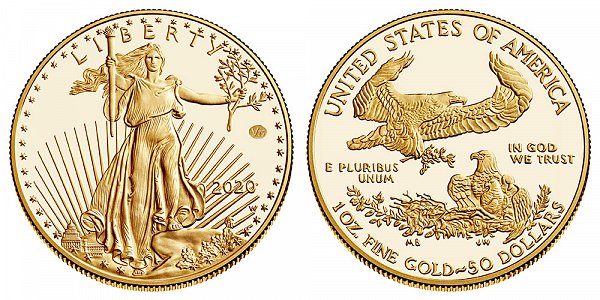 The West Point Mint released a special American Gold Eagle to commemorate the 75th Anniversary of the Victory and Triumph in World War II. This coin features a small privy mark on the obverse of the coin depicting V75 inside an outlined shape of the Rainbow Pool WWII memorial in Washington DC. The Mint produced only 1945 of these coins - making it the most limited and rarest American Gold Eagle issue ever produced by the Mint. The mintage limit of 1945 was specifically chosen to correspond with the year 1945 that World War II was won. The coin was only available for purchase on the US Mint website starting at noon November 5th at an original cost of $2600 per coin. The Mint reported that all coins were completely sold out in under 7 minutes and the website experienced the highest level of traffic it ever had - causing their servers to crash. This coin was minted alongside a special End of World War II 75th Anniversary American Silver Eagle.