Anthony de Francisci (Or Antonio) was born on July 13, 1887 in Palmero, the capital of Sicily, Italy. He was raised there by his parents Benedetto de Francisci and Maria Liberante. Anthony did not reside in Italy for very long before the family immigrated to the United States in 1905, which at the time, Anthony was only 8 years old. It would be until 1913 when Anthony Francisci would become a naturalized US Citizen at the age of 26. 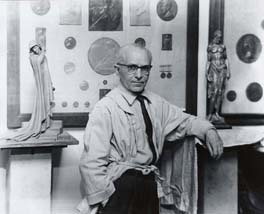 Shortly after becoming a citizen, he attended Cooper Union for the arts and was actually taught under James Earle Fraser, who was responsible for the design of US buffalo nickel. At the Art Student's League, Francisci developed his talents and skills as a sculptor, modeler and engraver. He had excellent teachers who really prepared him for his work at the US mint and elsewhere with the production of coins and medals. Other famous sculptors that Francisci assisted included Hermon A. MacNeil, who designed the US Standing Liberty Quarter, and Adolph A. Weinman, who was responsible for the design of the Mercury Dime and Walking Liberty Half Dollar, all extremely popular US coins. All of these artists and sculptors were excellent connections with the Mint.

Only two years later in 1915, Francisci was hired as an instructor at Columbia University. Then after two more years, he started up his own art and sculpting studio in 1917. Almost immediately, he was working with the mint in 1920 with the job of converting drawings into physical models. Ultimately, he ended up producing the commemorative 1920 Maine Centennial Half Dollar.

Only a year later in 1921, the US Commission of Fine Arts invited de Francisci along with 7 other "prominent sculptors", all from New York, to participate in a contest to design the new US silver dollar coin. The theme was to produce a "peace coin", which would replace the Morgan Dollar. Francisci was the youngest artist (aged 34 at the time) invited and his former mentors MacNeil and Weinman (who had already successfully produced US coins) were both competing as well. Each design was produced in bas-relief and was displayed in private in Mint Director Raymond T. Baker's office. Ultimately, the design that Francisci produced was unanimously chosen and US President Harding was pleased with the new design for the new US Silver Peace Dollar. Anthony de Francisci also won a grand prize of $1,500. 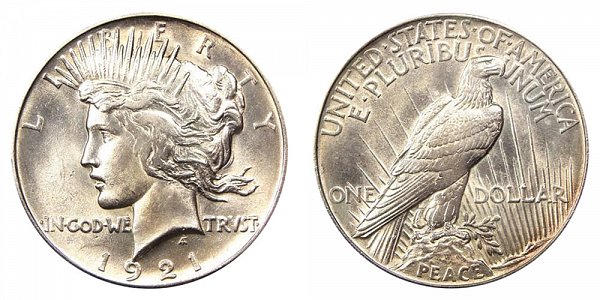 During the designing of this coin, the schedule was very tight and there wasn't much time to work on it. De Francisci didn't have the time to find any professional models that needed to be used in order to base the Lady Liberty on. Due to the time constraints, De Francisci asked his own wife Teresa de Francisci to be the model to base his coin off of. Teresa agreed happily to the idea of being the model for Lady Liberty, saying it was "the realization of my fondest childhood dream", and it turns out that she is the real woman on the peace dollar. 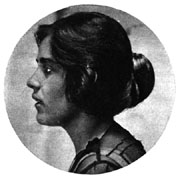 Depiction of Teresa de Francisci, the wife of Anthony de Francisci and model for the Liberty on the Peace Dollar.

Also during production, and like with many new coin designs, there were some controversies and critics. In de Francisci's original design for the peace dollar, he depicted a broken sword on the reverse of the coin. With good intentions, he put this on the coin to symbolize peace. Although many people took it the wrong way and thought it symbolized defeat and surrender. In the end, the Mint asked de Francisci to change the design and the broken sword was removed from the final design to eliminate any confusion. 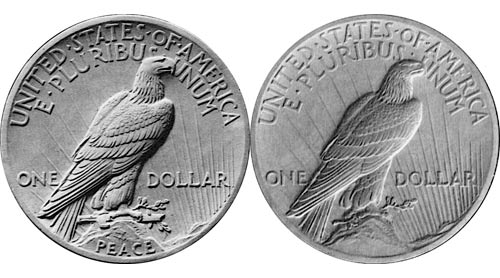 In addition, there were also technical problems with the original peace dollar. De Francisci's original design was a high-relief coin which was more detailed and the design was struck deeper into the coin. Although this coin was higher quality and more beautiful, it produced heavy wear and tear on the dies used to strike the coins. They kept having to replace the dies more often and so the coin was redesigned with a low relief strike. The 1921 and early 1922 peace dollars had the high relief design before it was changed for the following years up until 1935 when the peace dollar would last be produced. Most of the 1922 peace dollars were low relief except the early 1922 coins, which were very few and are now worth a tremendous amount of money for proof coins. 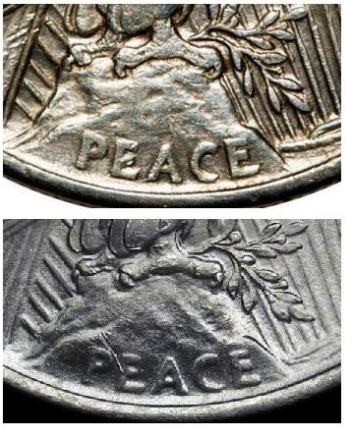 The peace dollar was Anthony de Francisci's most well known and legendary accomplishment. Most everyone was happy about the coin and it propelled his name and reputation into the mainstream, boosting his career. In 1926, he designed bronze reliefs on the base of the Sesquicentennial flagpole. The flagpole was raised on Independence day in Union Square, New York in order to commemorate the 150th anniversary of Declaration of Independence signing. Perry Coke Smith served as the architect for the project and the theme was to show the progress of humanity in science, art, crafts and technology along with figures symbolizing good and evil during the fight of independence from tyranny.

He had produced many other medals and coins, but no more official US coinage. Many of these medals, pins and buttons for the military and government offices. One famous military piece that he designed was a World War II Honorable Service Lapel Button. Unofficially, it is known as the "Ruptured Duck", which is coincidentally the same name of Captain Ted Lawson's B-25 bomber used in the war. The military did not issue this button, but it was available in the public to place on civilian clothes.

Typically, it was worn on the lapel by any World War II veteran who returned home. At the time, servicemen were not allowed to have civilian clothing in order to deter desertion. Although servicemen who were discharged were not allowed to wear a uniform. There was confusion on what they would wear when they traveled home. The military's solution was that servicemen could now wear their uniform for 30 days after they were discharged. The only requirement was that they must wear the Ruptured Duck lapel button to let military police know that they weren't deserters. The bird shown on the button is actually an eagle, but many servicemen thought it looked more like a duck, and so this is another major reason it is called the "Ruptured Duck". The end result was that millions of servicemen wore de Francisci's Ruptured Duck, which makes it major piece of United States cultural history. In addition, this is the same design used on the World War II Victory Medal.

Other medals that de Francisci designed was the Congressional medal for General John J. Pershing, who serviced as the commander of the US forces in World War I. The American Institute of Mining Engineers also hired him to produce a medal for US President Herbert Hoover, who was an fellow engineer in his earlier days. Anthony also helped Max Kalish produce sculptures and figures of the Roosevelt Cabinet.

Anthony was known to admire President Abraham Lincoln and incorporated him into many of his works throughout his career. One of his last works of art was a medal for the Hall of Fame for Great Americans, a medal that depicted none other than the great President Lincoln. Around the same time period, he produced a medal for the 1964/1965 New York World's Fair. Shortly afterwards at the age of 77 years old, Anthony de Francisci passed away on October 20, 1964.