John Flanagan was born in 1865 and resided in New York. At a young age, he began developing a talent for sculpting and modeling. Early on in his career, he managed to become an assistant to the legendary Augustus St. Gaudens, who was a highly reputable sculptor and later coin designer. Flanagan began working at his studio in 1885 at the young age of 20 years old and continued working with Saint-Gaudens for around 5 more years until 1890, working on major projects. One particular work art that Flanagan created was a bronze portrait depicting the bust of Saint-Gaudens, which is now on display at the New York University. 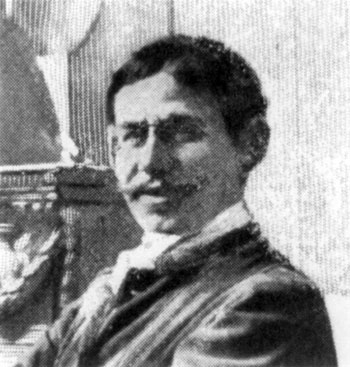 Photograph of John Flanagan, US Coin Designer and Engraver of the Washington Quarter.

Throughout his early career, he created sculptures and medals, while at the same time gained much experience and new talents. This is not surprising because he worked under Saint-Gaudens for a number of years, which also helped build his reputation and name. Since Augustus was connected with the mint, this also helped John Flanagan eventually get his foot in the door with the mint.

One particular beautiful sculpture that Flanagan produced was The Rotunda Clock in 1896, only 6 years after training under Augustus. The sculpture clock depicts Father Time holding an hourglass with other figures. Near the bottom, depicts two students reading and writing. The elaborate piece of art is sculpted out of various types of marble, overlaid by semiprecious stones, and the figures are made out of copper. The face of the clock depicts the sun in golden brilliance. This extraordinary work of art is located at the Library of Congress Thomas Jefferson Building, located in Washington DC. 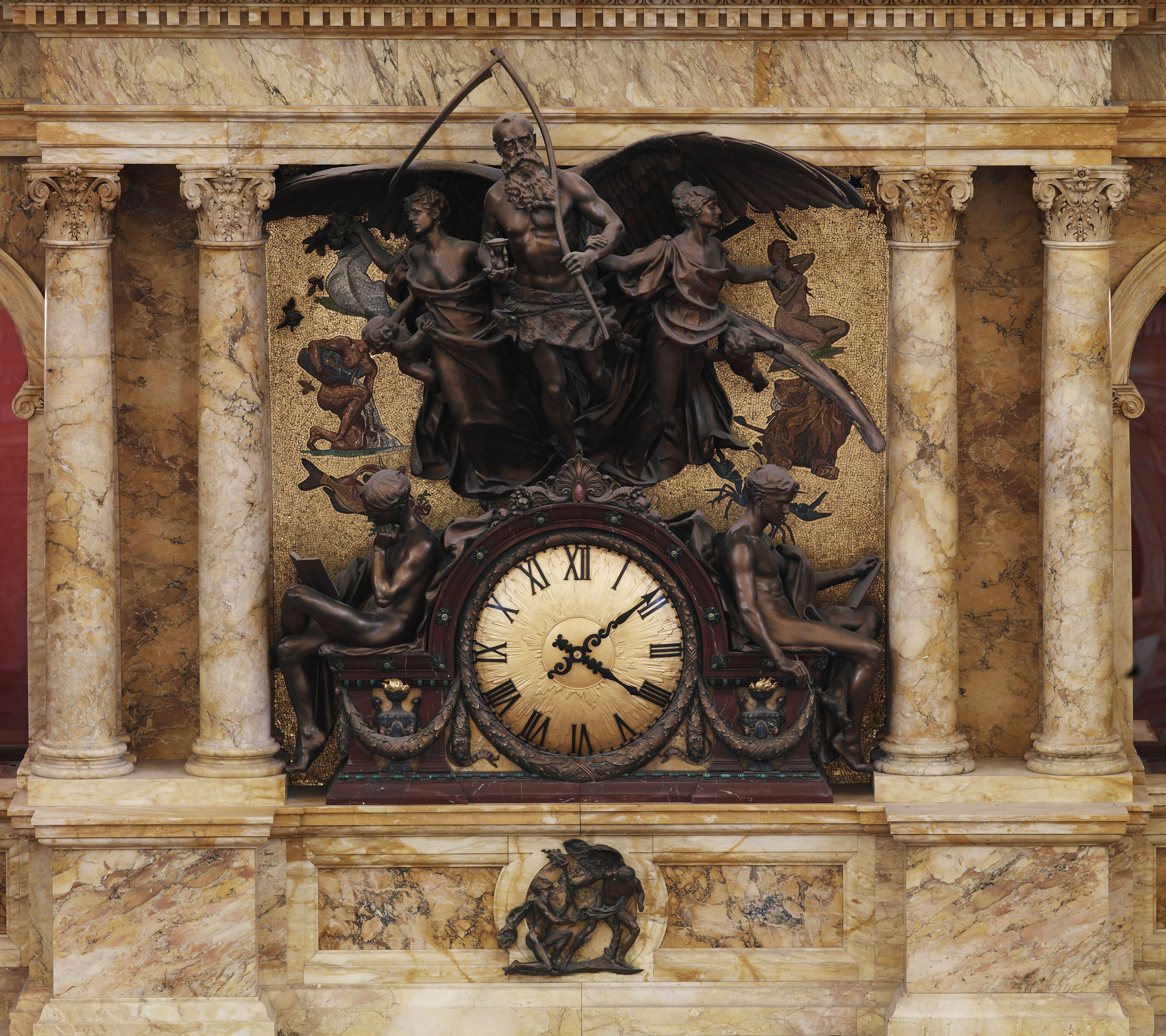 Originally, the coin was going to be a commemorative half dollar. The walking liberty would be replaced by Washington. Although at the time, the nation was caught in the Great Depression and no silver half dollars were being minted in 1930 and wouldn't be minted again until 1933. So the Washington Bicentennial Committee and the Commission of Fine Arts decided to begin a competition between artists and sculptors to design the new coin. The only requirement was that the obverse of the coin was to be based on a famous bust of Washington that was created by Jean-Antoine Houdon. The reverse of the coin was up to the artist to use their free imagination.

Over 100 entries were submitted for the new design. The Arts commissions chose Laura Fraser's designs as being far more superior than the other contestants. Laura Gardin Fraser is actually the wife of the famous coin designer James Earle Fraser, who had designed the Buffalo Nickel decades before. Laura had produced other commemorative coins, so she did make a name for herself in the past and her new Washington design was all set to be used for the new Washington half dollar, so at least many thought. 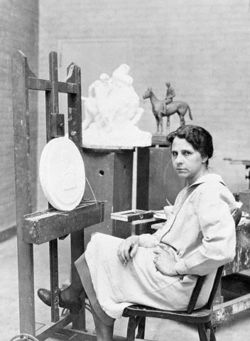 Photograph of Laura Gardin Fraser, original winning designer of the Washington Half Dollar (and Quarter)

To the surprise and outrage of the Washington Bicentennial Committee and Commission of Fine Arts, in February of 1931, new legislation was passed to produce a new quarter by 1932, with a permanent design change. The quarter would also be the new coin denomination that would commemorate Washington. The bill was then passed on March 4, 1931. The Mint's Assistant Director Mary M. O'Reilly, wrote to Charles W. Moore, the chairman of the Commission of Fine Arts. She asked him for advice on how to go about the new design changes. Moore responded and said that they should request that Laura Fraser simply adapt her winning half dollar design to fit on the quarter, which seemed like a common sense move.

However, Treasury Secretary Andrew W. Mellon stated that the Treasury originally had no part in the approval of Laura's design. So Mellon decided to hold another competition. The Fine Arts Commission of course recommended Laura Fraser's design since she won the original contest. Unfortunately, in November of 1931, Mellon had single-handedly chosen the design that John Flanagan had created, essentially robbing Laura Fraser of her win. Chairman Moore, along with coin designer Adolph Weinman, both protested the move and asked for Mellon to reconsider. Ultimately, all that Mellon would agree to is that the designers could have more time to improve their designs. More and Weinman particularly wanted more time for Laura Fraser since she deserved the win.

On January 20, 1932, the Fine Arts Commission again stood in support of Fraser. Treasury Secretary Mellon ended up leaving office on February 12, 1932, and he was replaced by Ogden L. Mills. Chairman Moore wrote the Mills on March 31, 1932 to protest Flanagan's design and to reconsider. In the end, Mills decided not to overrule Mellon's earlier decision. Finally on April 16, it was publically announced that John Flanagan's design would be used on the new Washington Quarter. 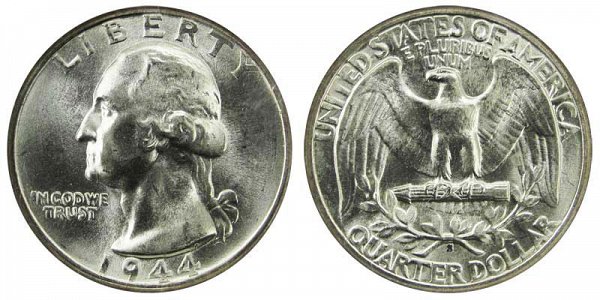 Design of the George Washington Quarter, by John Flanagan.

A famous numismatic historian by the name of Walter Breen had accused Mellon of discriminating against Laura Fraser because she was a woman. He was accused of knowing who submitted the winning design of the coin, and because of his male chauvinism, would not accept having a woman win. However, Bowers noted that Mellon did accept Fraser's designs to be used on commemorative coins and that Mellon had approved other coins designed by female artists and sculptors. Ultimately, Laura Fraser's winning Washington design was honored and used on a major commemorative gold half eagle coin in 1999, at the turn of the Millennium, to honor the bicentennial 200th anniversary of the death of George Washington. 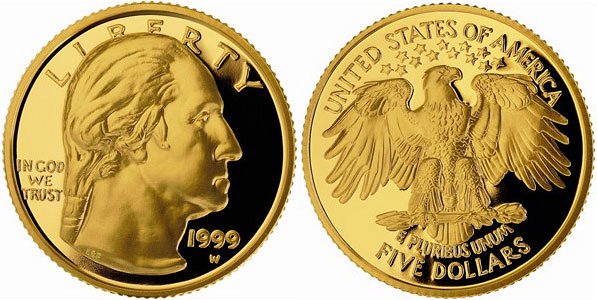 $5 Commemorative 1999 George Washington Gold Half Eagle, designed by Laura Gardin Fraser. This was the original winning design for the proposed Washington Half Dollar and then later chosen to be used as the Washington Quarter.

John Flanagan's Washington Quarter was first produced in 1932 as a silver quarter. However, it was not issued in 1933 due to the Great Depression and an excess supply of quarters from the year before, but striking was continued again in 1934. The coin was minted up until 1964. In 1964, there was a severe shortage of coins and the price of silver was increasing greatly. Since the value of metal in silver coins was increasing so much, the intrinsic melt value of the coin was worth more than the face value of the coin itself. Because of this, people were hoarding all of the silver coins and the mint was running out of silver bullion.

Therefore in 1965, President Lyndon Johnson passed the Coinage Act of 1965, which required that all dimes and quarters be struck in a copper-nickel clad composite. John Flanagan's design still remained, but the metal composition of the coin changed. This would be the new metal standard that would still be used until present times. John's original US Quarter design would continue up until 1999 when both the obverse and reverse would be changed for the 50 state quarter program.

The only other change to the Washington Quarter happened in 1976 when President Richard Nixon signed legislation to temporarily alter the reverse of the quarter, half dollar and dollar coins to honor the bicentennial of the United States (200th anniversary of the signing of our independence and creation as a nation). For the quarter, the Obverse still depicted Flanagan's original Washington design, but the reverse was changed to Jack L. Ahr's famous colonial drummer used on the Bicentennial Washington Quarter. Bicentennial coinage included any coins struck starting July 4, 1975 up until January 1, 1977. Starting in 1977, the original coin designs were restored. 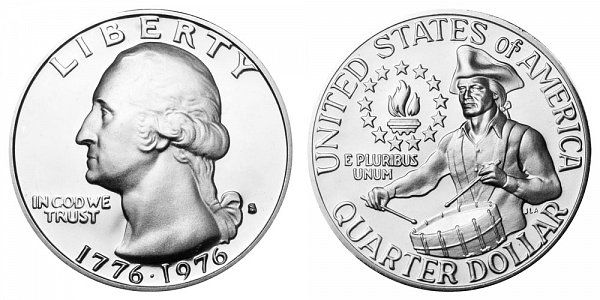 Flanagan only produced one official US coin in his career. Although, he did produce other medals and commemorative pieces later on after his work with the Mint. One particular medallion that he created was one that commemorated the battle of Verdun in World War I. On this medallion included the inscriptions: "They Shall Not Pass". John Flanagan passed away in 1952 after a long career as a prominent sculptor and designer of one of the most popular US coins ever made.