William Cousins is most famously known for his updated design of the Washington Quarter, which would be used in the 50 State Quarter Program and the American the Beautiful Quarter series. The story begins in December of 1993 when the Citizens Commemorative Coin Advisory Committee (CCCAC) was headed by Philip N. Diehl, the current Mint Director. At the beginning, CCCAC member David Ganz endorsed the US beginning a 50 State Quarter program where a quarter would be minted for each state in the order that each state entered the Union of the United States. A few years as the idea developed, US President Bill Clinton signed the United States Commemorative Coin Program Act. The 50 State Quarter Program began in 1999 and would last until 2008, depicting 5 new states on the quarters each year.

The new design for the quarter would be a modified version of John Flanagan's Washington quarter design. The new obverse designed by William Cousins would still depict a smaller bust of US President Washington. In addition, the "LIBERTY" text was replaced by "UNITED STATES OF AMERICA". The date was totally removed from the front of the coin and replaced with the text "QUARTER DOLLAR". The word "LIBERTY" replaced the words "IN GOD WE TRUST", which was moved to the right side of the bust of Washington. Cousins' design for the front of the Washington Quarter would remain until the present day, being used on the 50 State Quarters and America the Beautiful Quarters series. 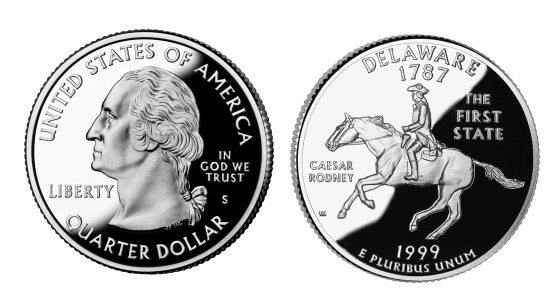 Design of the 50 State Quarters. Obverse of Washington designed by William Cousins. Reverse had many different designs created by many different coin designers over the years following.

The reverse of these coins had all kinds of different designs produced by many various artists and sculptors. One major designer was John M. Mercanti, the US Mint Chief Engraver who designed 7 different reverses for the 50 State Quarters. William Cousins designed the very first reverse for the 1999 Delaware Quarter, depicting Caesar Rodney on horseback. Cousins also designed the 2000 New Hampshire Quarter depicting the Old Man Of The Mountain. The reverse of all of these coins contained the date near the bottom and our motto "E PLURIBUS UNUM" below the date along the rim. 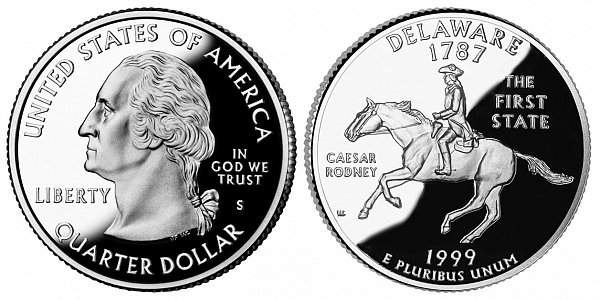 Design of the 1999 Delaware Quarter, designed by William Cousins. 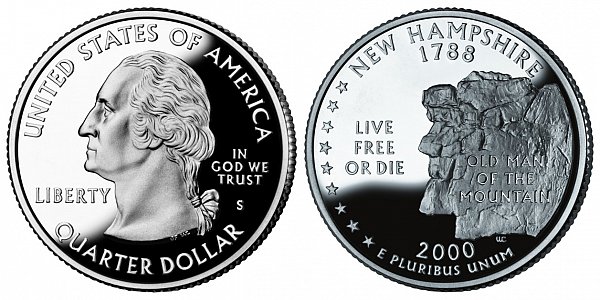 Design of the 2000 New Hampshire Quarter, designed by William Cousins.

It turns out that many billions of these quarters were minted. William Cousins' coin design is actually one of the most minted in US history. These coins are highly collectible and fun to search for, especially when you find a quarter depicting and honoring your home state. Silver proof sets containing these quarters were also minted. These coins are rarer and the coins contain 90% silver and 10% copper, which are produced for the collector.