The Dahlonega Mint is located in Georgia and is one of the least well-known mints in US history. This mint was established around the same time as the New Orleans Mint and the Charlotte Mint in 1837 when President Andrew Jackson signed into law to create a few new branch mints. Like the Charlotte Mint, Dahlonega was built to aid refining capabilities of the Georgia Gold Rush, which was the first gold rush in North America. Its purpose was to act as an assay and convert the newly found gold ore into coins, ingots and bars that could be used for currency. 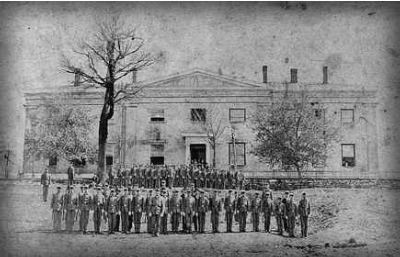 All coins minted in Dahlonega have a "D" mintmark. This is not to be confused with the "D" mintmark struck on all coins minted from the Denver Mint. There is an easy way to tell the difference though. Dahlonega minted coins between the years 1838 and 1861, which was well before the time when Denver built their mint and officially struck coins in 1906. Also, any coins coming out of Dahlonega were purely gold coins.

The building itself was built in 1837 and first started striking coins in April of 1838. The first coins that were made here was the $5 Gold Half Eagle of the Liberty Without Turban Half Eagle type. They continued minting until 1861 and produced coins that included the Coronet Gold Half Eagle, Gold Dollars, $2.50 Quarter Eagles and $3 Indian Princess Gold Coins.

When 1861 came around, the Civil War had begun and the mint was taken over by the Confederates. Like the other mints that they had taken over, they continued to produce gold coins under Confederate authority until the bullion ran out. In fact, the true mintage quantity of 1861 gold dollars is not precisely known but each coin is generally worth over $10,000 each these days. In fact, all coins minted from Dahlonega are very rare and are worth large quantities of money and are greatly sought after by collectors. The number of coins minted here came out to have a total face value of $6 million, which is about 1 million more than was minted in Charlotte.

After the Civil war ended, the mint was decommissioned and never continued production. After this, the building was essentially abandoned until North Georgia College was founded and the original mint building was used for space on campus in 1873. Unfortunately, a fire burned down the building in December of 1878. The college built a new building called Price Memorial Hall on top of the original foundation, which was named after the founder of the college, William P. Price. This building is still being used today.

Interesting Facts and Coin Statistics of the Dahlonega Mint

Total Number of US Coins Ever Minted in Dahlonega = 1,383,933
Over 1.3 million coins were minted in Dahlonega and that only includes the official US currencies. These figures come from adding up all of the mintages in our database from this particular mint, which does not include the coins that had "N/A" or unknown mint figures. So the number above is conservative and the total number of coins ever minted in Dahlonega throughout the entire history of the United States of America is at least this much!