Program and Designs of the 2009 Anniversary Lincoln Penny Collection

In 2009, the US Mint celebrated the bicentennial (200th anniversary) of the birth of US President Abraham Lincoln, as well as the centennial (100th anniversary) of the Lincoln Cent (or Lincoln Penny) itself. Throughout 2009, there was a series of 4 different designs released, which would be displayed on the reverse of the coin. Although the obverse of the coin would remain the same as it always had been, a portrait of Lincoln's bust, originally designed by Victor D. Brenner. The 4 different varieties on the reverse would reflect the life and activities of Abraham Lincoln.

This new coin program first began in 2005 as part of the Presidential $1 Coin Act of 2005. The bill was primarily drafted in order to authorize the production of a new golden dollar to honor each US President in the form of the presidential dollar coins. One provision in the bill included the authorization to redesign the reverse of the Lincoln Memorial Penny and replace it with 4 scenes depicting Lincoln's life, starting in 2009. This bill was first introduced on May 17, 2005 by Senator John E. Sununu (R-New Hampshire), approved by Congress and eventually signed into law by US President George. W Bush on December 22, 2005.

On September 22, 2008, a ceremony was held at none other than the Lincoln Memorial, located at the National Mall in Washington DC. Here, the 4 designs for this series of 2009 lincoln cents were revealed. Below is a table chart displaying the details of these designs, including large, high quality pictures and images, release dates, mintage figures for each mint (referencing to coin values and other details), and who engraved the set of coins. All four of these Lincoln cents were released in 2009:


These general circulation coins contain the same base metal composition as the Memorial Cent, which is comprised of 97.5% zinc and 2.5% copper. Although some special 2009 cents contain the original copper coin metal composition that they had in 1909, which contained 95% copper and 5% Tin and Zinc. As we all know, the melt value of copper coins increased so much that the intrinsic copper metal became more valuable than the face value of the coin itself, and so people began melting them down. The primarily copper penny was changed to a primarily zinc penny in 1982 and has remain that way ever since.

After the 2009 Lincoln Bicentennial, the original Lincoln Memorial design on the reverse of the coin was changed to the Union Shield design. The original wheat cent design was replaced with the memorial cent design on the 50th anniversary of the coin. In the same fashion, after 50 years of the memorial cent, this design was replaced with a new design known as the Lincoln Shield Penny (Cent), which still contains the original bust of Lincoln. The new shield design on the reverse of the coin was designed by Lyndall Bass, but sculpted and engraved by Joseph Menna: 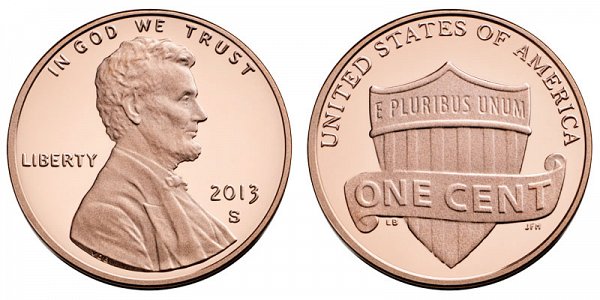