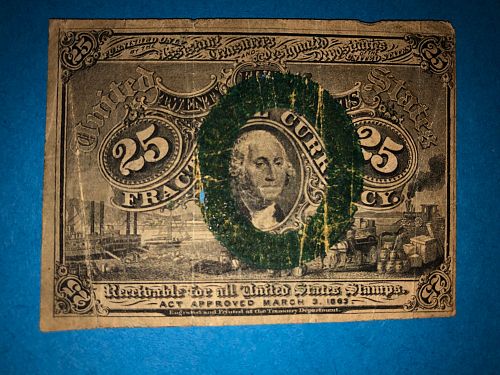 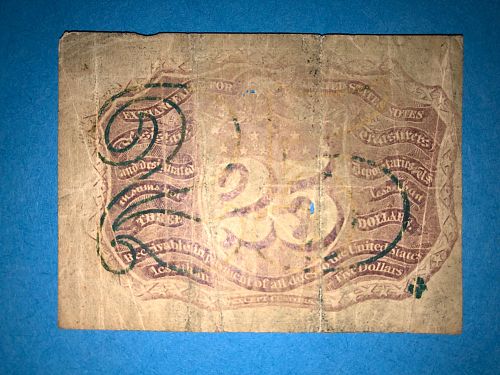 Fractional Currency notes, of which there are many varieties, denominations, and issues, emerged during the Civil War. Once the war began, the public chose to hold on to coins because of their value as precious metal. The result was fewer coins available for circulation.

To remedy the situation, Congress in 1862 authorized the use of postage and other stamps for paying debts to the U.S. government. This created a shortage of postage stamps. To solve this problem, notes in denominations of less than $1 were issued. These notes were known as postage notes because their designs were taken from existing postage stamps. Later issues of such notes in denominations under $1 had designs more in keeping with the appearance of currency notes.

DESIGN FEATURES OF FRACTIONAL CURRENCY The first issue of Fractional Currency had no Treasury Department signatures or seals. With the second issue, the size of all denominations became uniform, the obverse (the face) was printed in black and the reverse (the back) was printed in one of four colors (red, purple, green, or tan). With the third issue, more denominations were introduced. With the fourth issue, all denominations included Treasury seals. By the fifth issue, Fractional Currency was largely being phased out, and thus fewer varieties were produced.