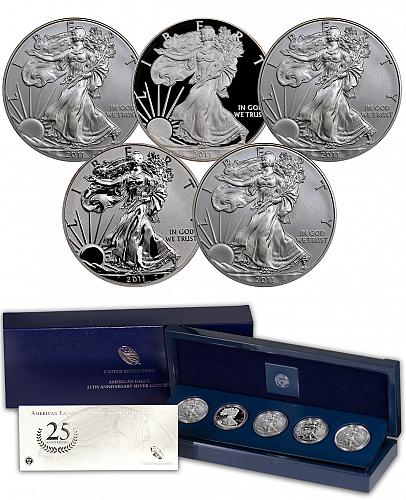 This is an unopened original box from the US Mint that can still be sent in to be graded as a 25 th Anniversary set American Silver Eagles are the most widely traded and collective silver coins in the world. This is the only set that has a S Mint state. The reverse proof and the San Francisco coins are unique to the set, and with a mintage of 100,000 and the second -lowest mintage Silver Eagle coins after the 1995 (W) Proof - only Silver Eagle. The 1995 coin was only available to collections who purchased a five-coin per set with Four American Eagle coins and the Proof Silver Eagle, so this is a similar rare opportunity.

The Five Coins in this set are: