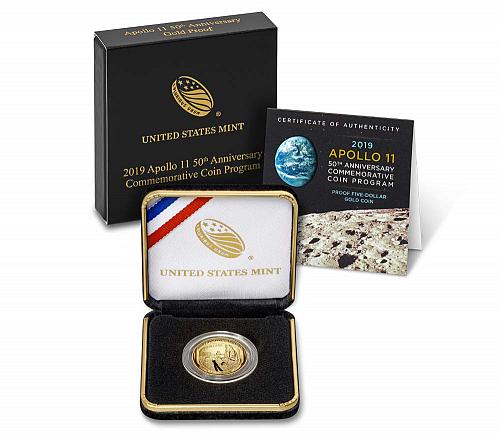 Hi! This is my first listing on USA Coin Book. After two decades of selling on Ebay, with close to a thousand positive feedbacks and ZERO negatives (link included in this listing), I wearied of what "Feebay" has become.

This is a 2019-W Apollo 11 $5 Gold Proof (Mint Item Number 19CA), in the original unopened US Mint sealed shipping package, and qualifies for PCGS "First Strike" designation [link will open in new tab].You (or your grading company) will be the very first -- outside of the U.S. Mint -- to see this coin.

I've included images of the U.S. Mint package, showing that it remains unopened, and the Order Summary (which confirms the date).

Important Note: The "blackout" of personal data in the images is only on the images -- it is NOT on the actual package!

I've also included photos -- downloaded from the U.S. Mint -- of the coin, its presentation package, and its Certificate of Authenticity. And, I've included photos of the free bonus coins (the actual coins you will receive).

Although there's free shipping for this package, no corners have been cut -- it will be sent via Priority Mail with adult signature required, fully insured via third party insurer. (USPS will not honor insurance claims in excess of fifteen dollars for coins unless they are sent via Registered Mail -- the most expensive and slowest service they provide!)

This coin was ordered very early on the first day of issue, and is the only Apollo 11 Gold Proof that we have.

As you are probably aware, this is a very remarkable proof coin -- The obverse is inscribed with the names of the three space capsule programs leading up to the Moon landings (Mercury, Gemini, and Apollo), the phases of the Moon, and an engraved representation of the famous "lunar footprint" photograph.

The reverse shows a similar representation of the memorable photograph of Neil Armstrong -- taken by Neil Armstrong -- shown as a reflection in Buzz Aldrin's helmet (along with the lunar lander and American flag.

While the remarkably photographic quality of the imagery is stunning, the most dramatic aspect of this coin is the curved planchet upon which it is struck. The convex side (the reverse) creates a very realistic near-3D representation of the helmet's front. The curvature of the coin matches the curvature of the face shield.

I'm also including two free bonus coins -- both are 2018-P American Innovation Dollars. One has the normal (incuse) edge lettering, and the other has inverted lettering.

In my opinion this first issue coin may become the most valuable in the American Innovation series. It was struck in 2018 -- the year prior to the official beginning of the program. (From the U.S. Mint's Press Release: "The program’s duration is a 14-year period that begins January 1, 2019." This is the only coin in the series that does not feature "a significant innovation, an innovator, or a group of innovators" -- instead:

The reverse of the introductory coin will be inscribed with “United States of America” and “American Innovators,” and it will include a representation of President George Washington’s signature on the first U.S. patent.

In short, this is a very unique coin -- a unique year of issue, and struck with entirely unique content. I think this might very well become a "sleeper" coin that in years to come may outshine any of the others in the series. I have placed each coin in a 2x2, labeled as to year and mint mark, and the inverted version is likewise noted. These coins came directly from the U.S. Mint rolls and placed into the mylar 2x2s, sealed with flat-clinched staples, to avoid any damage.

They will be placed in the same shipping box as the sealed, unopened U.S. Mint shipping package containing the 2019-W Apollo 11 Gold Proof.

I will soon be listing additional coins, starting with a few Silver Proof versions of the Apollo 11 coin, which, like this coin, are in unopened, original U.S. Mint packaging -- and, like this coin, will qualify for PCGS "First Strike" designation.

I'll also be listing a large variety of coins - everything from "cherrypicked" US and Canadian coins, and a few "NIFC" coins purchased from the U.S. Mint, i.e., P and D strikes of the 2018 American Innovation Dollar (both normal and inverted edge lettering), 2018 JFK Half Dollars, the "Jim Thorpe" Dollar (Philadelphia only, because it had lower mintage), and a few of the 2018 Silver Reverse Proof Sets. So keep checking back! You never know what I'll be listing next -- or how many of them there'll be!

In case anyone is wondering, yup, I'm the same Howard Black you may have seen commenting on Coin Talk, Coin Community, YouTube and Facebook. Still working on putting video content together with my son. If you enjoy parody/satire type comedy, peppered with serious numismatic content, feel free to subscribe to my YouTube channel [link will open in new tab].