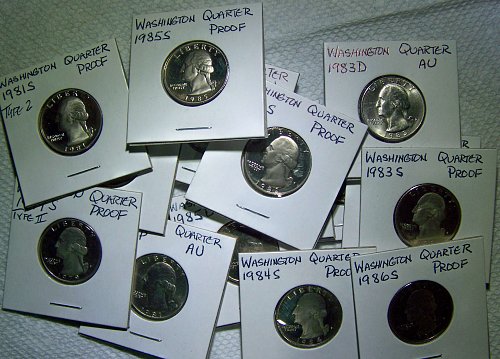 COLLECTORS LOT of 15 Washington Quarters.  These coins range between 1979 and 1986, and there are no duplicates.  This lot consists of 4 AU (including the hard to find 1983-D), 4 BU, and 7 PROOF coins.  All are mounted in standard 2x2 holders and ready to be added to your collection.

I combine shipping when possible, and I will either send an amended invoice to reflect savings, or I will refund any excess payment received from the buyer.

No-cost pickup can be arranged in the North Central San Antonio area.

This auction consists of the following:

Shipping services available:
Payment methods accepted:
Return Policy:
Item must be returned within: 7 days - Buyer pays return shipping costs.
Refund will be given as: Money back
Return policy details:
Return accepted only if the item received differs significantly from the item described and pictured herein.