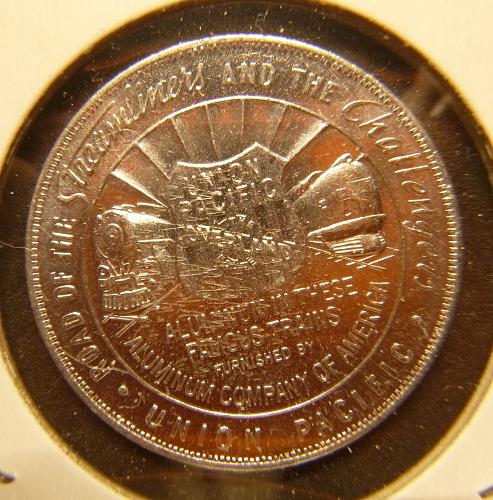 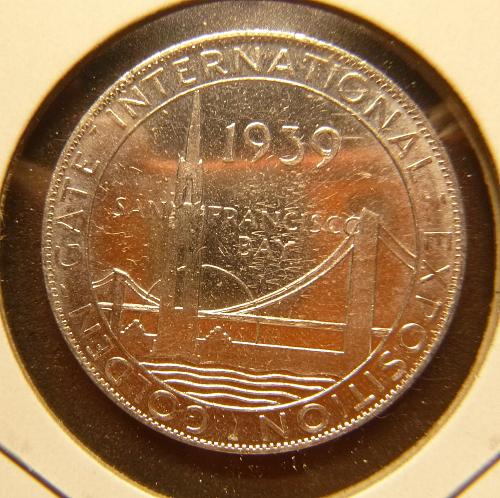 Lettering:
ROAD OF THE Streamliners AND THE Challengers
UNION PACIFIC
OVERLAND
ROUTE
ALUMINUM IN THESE
FAMOUS TRAINS
FURNISHED BY
ALUMINUM COMPANY OF AMERICA
• UNION PACIFIC •

The 1939 Golden Gate International Exposition was a World's Fair held on Treasure Island in San Francisco Bay. One side of this 32mm aluminum medal features the official seal of the Exposition, which incorporates the newly constructed San Francisco - Oakland Bay Bridge and the 400 foot "Tower of the Sun". The other side of the medal features both a steam and diesel-electric locomotive engine and the logo of the Union Pacific Railroad.
The Streamliner was a streamlined light-weight diesel-electric passenger locomotive that was introduced in 1934.
The Challenger was a huge articulated 4-6-6-4 steam locomotive that was introduced in 1936. It was nearly 122 feet (37 meters) long and weighed more than a million pounds (450,000 kg.).
http://www.joelscoins.com/tokens.htm

Washington Sales Tax: Buyers located in the US State of Washington must pay an extra 10.00% sales tax as set by the seller. This comes out to be an extra $0.33 for this item based on the current price. This tax will be applied during checkout after a shipping address is provided.


Shipping and handling
$0.10 shipping for each additional eligible item you buy from OLDIES4SALE-2007.