US Chief Coin Designer and Engraver - Kennedy Half Dollar

Gilroy Roberts was born on March 11, 1905 in the city of Philadelphia, Pennsylvania. Throughout his childhood, Gilroy was surrounded by art and grew a passion and natural talent for it. After all, his father was also a professional sculptor and so Roberts learned how to sculpt and create works of art starting at a young age. He started with works of clay and then moved on to more advanced modeling such as carving wood. Eventually, he began sculpting art out of more difficult materials such as stone. As Gilroy got older, he took up evening art classes while attending high school. He studied under a popular sculptor named Paul Remy, who helped Robert become more experienced and hone his skills in the arts.

Gilroy Roberts - Ninth Chief Engraver and Sculptor of the US Mint

Roberts created small sculptures and models during his free time. Although in 1936, he took it one step further and launched the beginning of his professional career. That year, he took a Civil services test and applied for a job at the US Mint where he could work as an assistant engraver and sculptor. Of course he passed that test and successfully got the job at the Mint at the age of 31 years old. However, he didn't stay there very long. In fact, he actually left the mint after only about a year and a half of working there. He ended up getting a different job at the Washington DC Bureau of Engraving and Printing, working under a staff position. Instead of working on coins, he was responsible for designing official US postage stamps and revenue stamps. Not only would Roberts be famous in numismatics, but the philately field would recognize him for designing portraits honoring prominent people such as Stephen Foster, Eli Whitney and Ralph Waldo Emerson.

Almost a decade after first working at the US mint, he left his job at the Bureau of Engraving and Printing and returned to the US Mint in May of 1944. After filling out his credentials and gaining more experience, this time he landed in a job position of being the top assistant working under Chief Engraver John R. Sinnock. Over the next few years Sinnock's health was diminishing and Roberts helped him with some artwork for the Roosevelt Dime. In 1947, Sinnock passed away before he could finish designing the Franklin Half Dollar. He was able to finish just the obverse depicting the Bust of Benjamin Franklin and part of the reverse of the coin, but Gilroy Roberts was actually the one responsible for finishing the design and engraving the Liberty Bell on the reverse of the coin. The Coinage Act of 1873 stated that an eagle was required on any coinage greater than 10 cents, and so Roberts added a small eagle to the reverse as an afterthought. 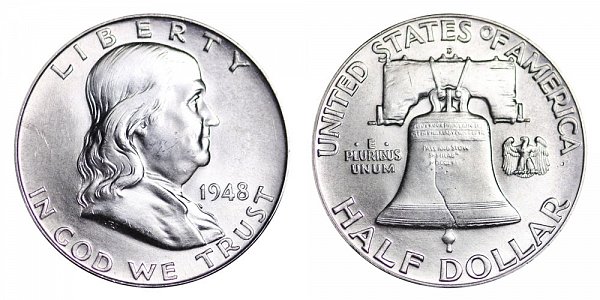 After Sinnock Passed away, US President Harry Truman appointed that Gilroy Roberts take over the post and become the ninth Chief Engraver and Sculptor of the US Mint starting on July 22, 1948. Throughout his career at the Mint, Roberts produced many commemorative coins and medals. Some of these included Congressional medals for US Presidents such as Harry Truman, Dwight Eisenhower, John F. Kennedy and Lyndon Johnson. One of these medals would be used as the basis for a new US coin later on. Foreign governments also called on the US Mint to assist and produce coin designs for their own nations. Some of these countries included Denmark, Colombia, El Salvador, Cuba, Haiti, Ethiopia and Liberia. Throughout the decade, there wasn't much demand for new US coinage and work was getting slow, except for the new design of the Lincoln Memorial Cent. In 1954, nearly all production of commemorative coins was halted as well. That changed in 1963.

On November 22, 1963, US President John F. Kennedy was assassinated. The nation was stunned and in a state of mourning for Kennedy. Immediately, just within a few days, there was a call to honor the President on US coinage, either on the US Quarter Dollar, Half Dollar or Dollar coins. Based on the preference of the widowed Jacqueline Kennedy, the Half Dollar was chosen for a redesign.

The design for the new coin would be based on a presidential medal that Gilroy Roberts and Frank Gasparro, who was a top assistant of Roberts at the time, had both created in 1961 honoring the inauguration of John F. Kennedy. Roberts designed the front of the medal depicting the bust of Kennedy while Gasparro designed the reverse of the coin. Roberts had actually met the President in the White House in 1961 in order to work on his portrait. Roberts had stated that Kennedy's personality was "very personable, dynamic and very outgoing". He noted that Kennedy did not critique his work, but had asked Robert for his advice on the political significance of the medal. Roberts was amused by this and replied to Kennedy that there would be no political overtones involved. Roberts found this experience helpful and very worthwhile when it came down to designing the new half dollar. 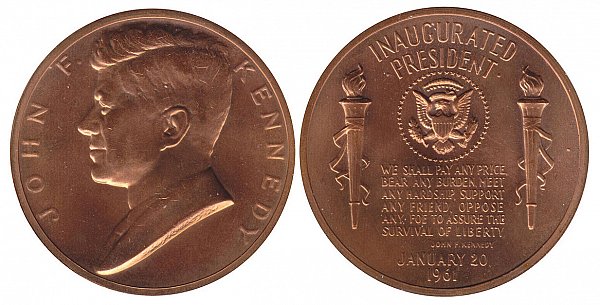 Kennedy's Presidential Medal - Used as the basis for the US Kennedy Half Dollar design. Obverse with bust of Kennedy designed by Gilroy Roberts, Reverse was designed by Frank Gasparro.

During the design of the half dollar, Roberts had created a modified version of Kennedy based on the presidential medal. Gasparro had to rework the reverse of the medal and came up with a larger version of the eagle used on the Great Seal of the United States. Once the design was completed, Roberts was asked to come to Washington and meet with Jackie Kennedy in order to receive her approval on the coin. She was very impressed with the designs for both sides of the coin. She recommended that the coin would be improved if Kennedy's hair was less pronounced and if more accents were added to it. Roberts agreed with her and stated it would give the portrait more spontaneity. With a few slight modifications to the coin, the Kennedy Half Dollar was approved and was produced for general circulation in 1964.

Kennedy Half Dollar - Obverse with bust of Kennedy designed by Gilroy Roberts, Reverse was designed by Frank Gasparro.

This new coin brought Roberts tremendous fame. In fact, the Kennedy Half Dollar was one of the most popular US coins ever made. Although with all new coin designs, there are critics and urban myths. One of which was a claim that the initials "GR" on the neck on the bust of Kennedy was actually a Soviet Union hammer and sickle placed on the exact spot where Kennedy was shot. Things got so out of hand that the Treasury Department issued a statement denying this rumor and that the "GR" initials were simply the initials of Gilroy Roberts. During this time period after World War II and during the Cold War, there was a very strong anti-communist view in the country, so these claims were not so unusual. In fact, when John Sinnock designed and produced the Roosevelt Dime in 1946, his "JS" initials on the coin were falsely rumored to be placed there by a soviet spy working at the Mint and that the "JS" stood for Joseph Stalin of Soviet Russia. Again, the Treasury had to debunk this false rumor.

The coin was originally struck with a 90% silver and 10% copper metal composition. The very next year, Lyndon B. Johnson signed the Coinage Act of 1965 which required all new dimes and quarters be struck with a copper clad metal alloy of 91.67% copper and 8.33% nickel. The reason for this was due to rising silver prices and people hoarding up silver coins so they could melt them down. The melt value of silver coins was worth more than the face value of the coin itself, because the intrinsic precious metal was worth so much more. The metal composition of the Kennedy Half Dollar changed to 40% silver and 60% copper starting in 1965 up until 1970. Starting in 1971, all of the silver was removed from the coin and the metal composition change to the standard copper clad alloy. During the US Bicentennial, Frank Gasparro's reverse of the Kennedy Half Dollar was changed to the Independence Hall design that was designed by Seth G Huntington between 1975 and 1976. Afterwards, the reverse was restored; Gilroy Roberts and Frank Gasparro's Kennedy Half Dollar designs remain until the present day.

Only a few months after the Kennedy Half Dollar was minted, Gilroy Roberts retired from the US Mint on October 8, 1964, and his assistant Frank Gasparro became the new Chief Engraver and Sculptor there. At the age of 59, Roberts was the first US Mint Chief Engraver since the birth of the nation to retire from his post, while all those before him had died in office. Even though he had retired from public service, Roberts would still continue his work in art and sculpting. In fact, he was offered, and accepted, a position as Chairman of the General Numismatics Corporation. Not long after, he met up with Joseph M. Segel, who at the time was an advertising executive in Philadelphia. The two of them teamed up and helped turn GNC into what is now known as The Franklin Mint. Eventually, Franklin Mint would become known as the world's largest private mint.

Over the years, Gilroy Roberts would continue using his talents to personally engrave coins and medals for the Franklin Mint. He also used his experience to obtain the proper minting equipment and build up the administration and technical workings of the company. One very popular series of official coins that he produced was for the British Virgin Islands, which depicted various birds native to the islands. He produced many other commemorative coins and other medals here for a variety of clients.

In 1971 At the age of 66 and after working at the Franklin Mint for 6 years, Roberts added the title "emeritus" to his position. He was semi-retired for 9 more years until he retired completely in April of 1980 at the age of 75. Still, he continued to do various consulting jobs and commissions, sometimes a great volume of them during his retirement. One notable work that he produced in 1986 was a gold medal designed for Encyclopedia Britannica to be used as the Britannia Award. That very same year, he also produced one more commemorative medal for the Franklin Mint, a medal to honor the 25th anniversary of John F. Kennedy's presidential inauguration. Interestingly enough, he got to look back at his own works and use them as a model for this new medal.

In 1991, Gilroy decided to donate the tools that he had used for sculpting and engraving. These were donated by the Gilroy and Lillian P. Roberts Charitable Foundation to the American Numismatic Association (ANA) Museum, based in Colorado Springs, Colorado. Gilroy Roberts passed away on January 26, 1992, just a few weeks short of his 87th birthday. Roberts was known as a humble man who had made legendary accomplishments. Many hailed that the Kennedy Half Dollar is one of the most beautiful modern US coins ever designed, and it was especially popular among the US people. Roberts himself quoted "I guess that's the thing I'll always be remembered for", when speaking about his Kennedy half dollar design. His accomplishments would earn him a place of honor in the world of numismatics and would raise the standards for future US coin designs, engravers and sculptors.