In 2004, the US Mint began a commemorative coin program known as the Westward Journey Nickels. This series was created in order to celebrate and honor the bicentennial (200th anniversary) of the Lewis and Clark Expedition and Louisiana Purchase, which happened over a period of years between 1804 through 1806. This coin program was to last just two years, between 2004 through 2005. Each year, two different designs would be depicted on the reverse of the Jefferson Nickel. In 2005, the reverse portrait of Jefferson would also be changed. 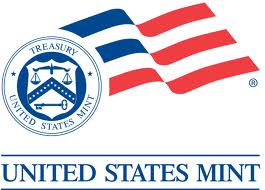 The Westward Journey Nickels Program itself began around June of 2002 when officials at the US Mint were interested in possibly changing the coin in honor of the Lewis and Clark Expedition, which would begin it's bicentennial in 2004. To do this, they needed support from the US Congress to authorize this. First, they contacted US Representative Eric Cantor (R-Virginia). Eric Cantor did have some concerns about the new designs of the coin, particularly removing the Monticello, which was located in his home State of Virginia.

Ultimately, after Cantor was reassured that the Monticello would return back on the nickel in 2006, he agreed to support the new legislation known as the American 5-Cent Coin Design Continuity Act of 2003. This bill authorized the US Treasury to make changes to the design of the Jefferson nickel throughout 2004 and 2005. Although when 2006 came around and after the program ended, a portrait of US President Thomas Jefferson and the Monticello were required to return as the design on the coin. On April 23, 2003, President George W. Bush signed the bill into law and authorized the changes.

Later that year in November of 2003, the US Mint released two new designs for the reverses of the 2004 Westward Journey Nickels. The first design depicted a modified version of the Indian Peace Medals that were struck for Thomas Jefferson. This coin design was designed by Norman E. Nemeth, an engraver and sculptor at the Mint. The second design depicted a keelboat, a type of boat that was used during the Lewis and Clark journey. This was designed by Al Malesky, engraver and sculptor at the Mint. The obverse of the coin depicted the original bust of Jefferson, designed by Felix Schlag and used since 1938.

During the next year, two more designs would be produced for the reverses of the 2005 Westward Journey Nickels. The first one was designed by Jamie Franki and depicts and American Bison (or Buffalo). The second design depicts a view of the west coast of America and a view of the ocean with the words: "Ocean in view! O! The Joy!", which was written by William Clark into his journal ("ocean" was actually spelled "ocian" in his journal, but the Mint used more modern spelling in this case). However, for the first time in 67 years, the obverse (or front of coin) was changed in 2005 to a new design of Jefferson, designed by Joe Fitzgerald. In addition, the word "Liberty" on the front of the coin was stylized in Thomas Jefferson's very own handwriting used in a draft of the Declaration of Independence. Although a capital "L" had to be found in a different source of his writings.

After The Westward Journey Nickel Series: 2006 Return of the Monticello

After the Westward Journey Nickel series ended, the Monticello, designed by Felix Schlag, was returned to the reverse of the coin. The Monticello design was sharper, crisper and more refined this time though. However, a newer obverse of Jefferson was designed by Jamie Franki, which is different than the design made a year earlier for the 2005 nickels. This design depicts Jefferson facing forward and looking at the viewer. This 2006 nickel became the new standard Jefferson nickel that has been minted to the present day. 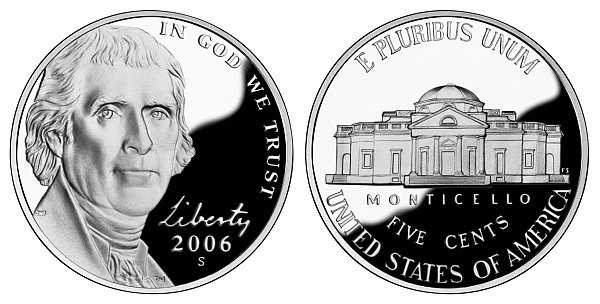 After the Westward Journey Nickels and starting in 2006, the Monticello was returned and the bust of Jefferson was redesigned by Jamie Franki. This is the new Jefferson Nickel used to the present date.