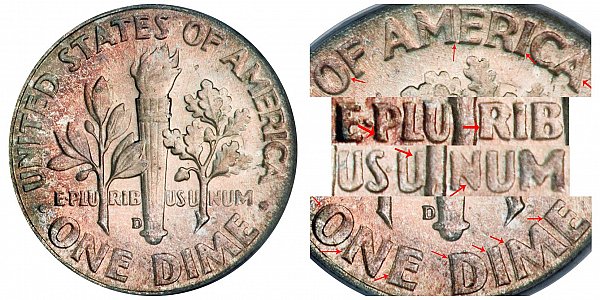 The 1964 D Silver Roosevelt Dime had a major error on some of the coins. Some coins feature a slight doubling of the words "UNITED STATES OF AMERICA" - "ONE DIME" and the motto "E PLURIBUS UNUM" on the Reverse of the coin. The most prominent and noticeable doubling occurs in the word "ONE DIME" as depicted by the arrows above. Noticable doubling also occurs through out the words "UNITED STATES OF AMERICA" but expecially in the words "OF AMERICA" as depicted. The doubling is far harder to spot in the "E PLURIBUS UNUM" motto. The thing to look for here is slightly wider letters and very slight doubling on a few of the letters - especially in the letter "N" in "UNUM". These are also depicted by the arrows in the example image of the coin above. There are many varieties of this double die reverse (DDR) error and not all doubling will appear as strongly. The value goes up with stronger and more noticeable doubling.