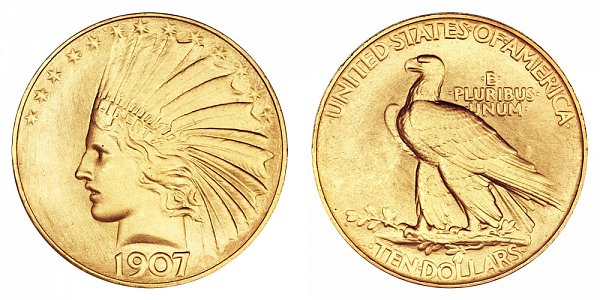 There were multiple varieties of the 1907 $10 Gold Indian Head Eagle - some extremely rare and valuable. One major variety is the "Round Rim" - also known as the "Rolled Rim" type with extra Periods on the reverse of the coin. This variety is extremely rare and valuable - 31500 were originally produced for circulation - but they were melted down except for about 50 of them that are known to exist.

The "Wire Rim" design was actually the original design created by Augustus Saint Gaudens - which did not include a rim on the coin. The coin making process created a "fin" of excess gold that could easily be broken off and devalue the coin - making it troublesome for trade. The lack of rim also caused the date and design to be worn down prematurely. Eventually Chief Engraver Charles Barber included a rim to the die in order to solve the problem. About 500 of these coins were produced and distributed to government officials. Barber's Rounded Rim (or Rolled Rim) design is easily distinguishable with the addition of the rim on the coin. The difference between the Wire Rim vs Rolled Rim is depicted below in the example comparison image (Source of example images is courtesy of Heritage Auction Galleries): 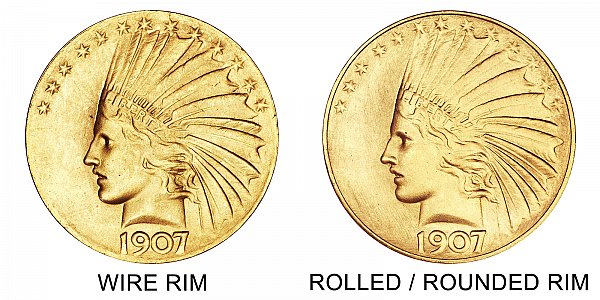 There were two major sub-varieties of the Rounded Rim variety. One variety features periods around each of the words in the legend: *E* *PLURIBUS* *UNUM* and also: *TEN*DOLLARS* on the reverse of the coin. This is the extremely rare and valuable variety (as depicted above at the top of the page). The common "No Periods" variety was produced later on and has no periods before and after "TEN DOLLARS" (except between: TEN * DOLLARS). The difference between the "With Periods" vs "No Periods" is depicted below in the example comparison images (Source of example images is courtesy of Heritage Auction Galleries): 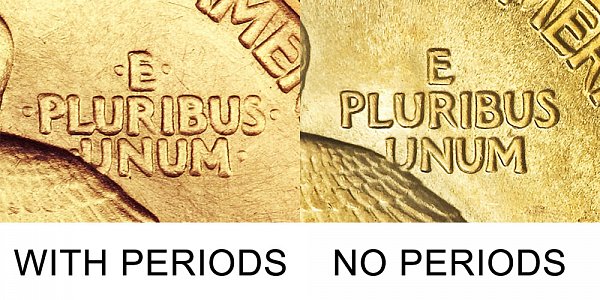 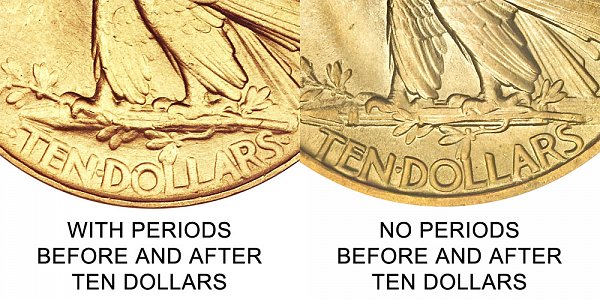 USA Coin Book Estimated Value of 1907 Indian Head Gold $10 Eagle (Rounded Rim - With Periods Variety) is Worth $60,960 in Average Condition and can be Worth $108,839 to $151,331 or more in Uncirculated (MS+) Mint Condition. Click here to Learn How to use Coin Price Charts. Also, click here to Learn About Grading Coins. The Melt Value shown below is how Valuable the Coin's Metal is Worth (bare minimum value of coin). Click here to see the Melt Value of every US Coin.