With Motto - In God We Trust 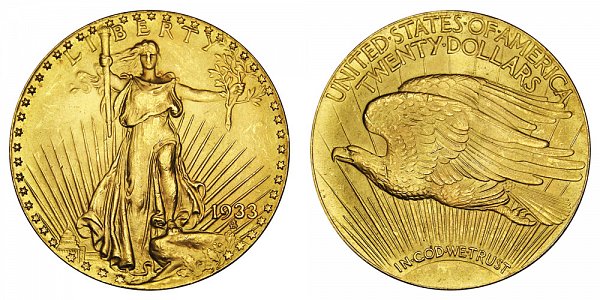 The 1933 $20 Saint Gaudens Gold Double Eagle is one of the most famous and most valuable of all US coins. It has a unique history related to the Great Depression and even major legal disputes today. 445500 of these coins were actually produced in 1933 - yet none of them went into circulation.

During the height of the Great Depression: President Franklin D. Roosevelt signed Executive Order 6102 which called for the confiscation of gold to the Federal Reserve - which outlawed circulation and private possession of US gold coins with the exception of collectible gold coins. The 1933 double eagle gold coins were struck after the executive order was signed. Since gold coins were no longer legal tender - nearly all of them were melted down. Only 2 coins were purposely saved by the US Mint and presented to the US National Numismatic Collection at the Smithsonian Institute. However - these are not the only 1933 double eagles to survive.

About 20 of these coins were stolen from the US Mint before the rest were melted. These coins got into the hands of collectors through Israel Swift who was a Philadelphia jeweler (who later admitted selling the coins but couldn't remember how he obtained them). These coins traded hands between collectors for years before the Secret Service became aware of these coins appearing at a Stack's Bowers auction. The first investigation was launched in March of 1944. 7 coins were recovered that same year along with one in 1945 and finally a total of 10 coins were recovered by 1952 - all of these were destroyed by the US Mint.

One coin was acquired by King Farouk of Egypt. He purchased the coin in 1944 and applied to the US Treasury Department for an export license for this coin - which was mistakenly approved only days before the US Mint theft was discovered. The Treasury Department used diplomatic channels and attempted to recover the coin - but was unsuccessful during World War II. In 1952 the King was deposed in a coup d'etat and his possessions went up to public auction - including the 1933 $20 Saint Gaudens double eagle. The US again requested that the coin be returned and Egypt did agree - but the coin mysteriously disappeared and wouldn't be seen again for over 40 years.

In 1996 - a British coin dealer Stephen Fenton was arrested in a sting operation by the Secret Service. He later admitted that this was the King Farouk coin and the charges were dropped. He tried to defend the ownership of the coin in court. In 2001 - the case was settled and it was agreed that the ownership of the coin would be reverted back to the US government - and then the coin could be legally sold at auction. The government issued a document to officially and formally "issue and monetize" the coin as legal tender again. This coin was actually held in a treasury vault in the World Trade Center until July 2001 when the case was settled - only two months before the buildings were destroyed. The coin was held at Fort Knox after July. On July 30 of 2002: the coin was sold at a quick 9 minute-long Sotheby's auction for $6.6 Million plus a 15% buyers premium and $20 to "monetize" the coin so it would become legal tender - a total cost of $7590020.00. Half of the bid plus $20 went to the US Treasury and the other half went to Stephen Fenton. Due to this particular coin's rich history - it is perhaps the single most valuable US coin ever.

In 2005: 10 more coins were recovered from the family of Israel Swift - who originally sold the first 10 coins back in the 1930s and 1940s. Joan Swift Langbord voluntarily surrendered the coins to the Secret Service and the coins were authenticated. This case went to trial in 2011 and a jury unanimously ruled in favor of the US government retaining ownership of these 10 coins. Technically these coins cannot be legally possessed by any member of the public - with the exception of the single King Farouk piece sold in 2002. There is an argument that the coins may have been obtained legally by exchanging gold bullion for coins within a 3-week window between March 15 and April 15 of 1933 when Roosevelt's Executive order was still being finalized - even though the coins were never issued to the public. In April of 2015 - a US Federal Appeals Court ordered that the coins be returned to Langbord because they were seized improperly - but the order was reversed in July. As of October 2015 - the Third Circuit Court of Appeals still hearing arguments and a final decision is expected sometime in Spring of 2016 on whether Landbord will be able to keep the ten 1933 $20 double eagles.