1832 Capped Bust Half Dollars : All Varieties 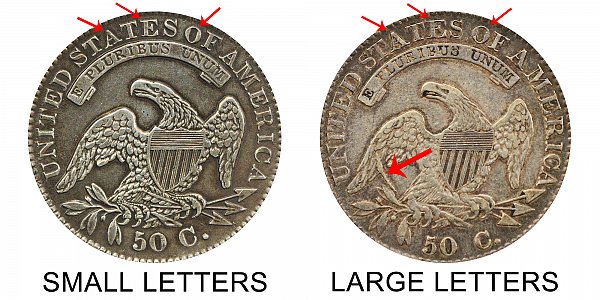 There are 23 known varieties of the 1832 Capped Bust Half Dollar - but they can be divided into two major types based on the size of the lettering in the words "UNITED STATES OF AMERICA" on the reverse of the coin. It is often very difficult to distinguish the sizes of the lettering as there are 23 different varieties with varying letter sizing and orientation (only one of these varieties is a large letter variety - known as Overton 101 or O-101). Basically the small letters are slightly less than 2mm tall and the large letters are slightly greater than 2mm. One way to identify the variety is to view the letters "E" and "A" in the words. These will appear smaller relative to the other letters - whereas the letters will look equal in size in the large letter variety. The same is also true with the letter "O" in the word "OF".

Probably the easiest way to tell the difference between the small and large letter varieties is to realize that there is a massive die crack on the left-side wing of the eagle. Only the large letters variety (Overton O-101 and O-101a) has the crack - and the crack gets larger over time. These features are depicted above in the example comparison image of the 1832 large letters vs small letters half dollar varieties.

1830 Half Dollar: All Varieties 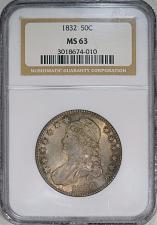 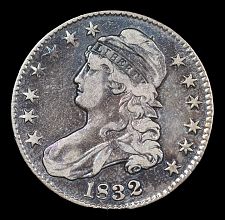