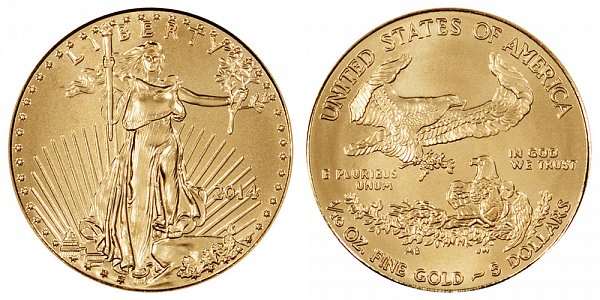 There are two major varieties of the 2014 $5 Gold American Eagle. The ultra-rare variety is known as the "Narrow Reeds" variety and the more common variety is known as the "Wide Reeds". The difference between the two coins depends the thickness of the reeds on the edge of the 1/10 oz $5 gold eagle. The "Narrow Reeds" are much finer than what the reeding normally is for $5 gold eagles. Experts say the US Mint was using a narrow reeds collar for $5 gold buffalo coins being minted in 2008 and they began experimenting on using this for gold eagle in 2014. The 2014 "Narrow Reeds" was discovered in 2015 after the 2015 "Narrow Reeds" variety was discovered - but the 2014 variety is exceptionally rare with only 11 examples known worldwide. The first example sold for $28650 and more of these may still be undiscovered.