Charles Edward Barber is famous for being the sixth Chief Engraver of the US Mint and for his design of the silver US "Barber" Coins that would be named after him. Charles was born on November 16th, 1840 in London and moved to the United States in 1852 with his family. His father, William Barber, was actually the fifth Chief Engraver and Charles E. Barber would ultimately take over his post after William's death. 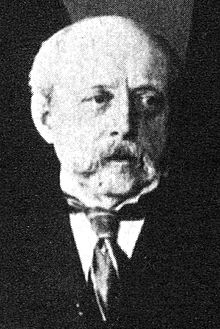 Portrait of Charles E. Barber - US Coin Chief Engraver and Designer at the US Mint.

William, the father, got his job at the Philadelphia Mint in January of 1869. Charles was then 19 years old at this time and this would be the age he would begin his apprenticeship with his father. The younger Barber would first become an assistant and begin learning and improving his modest skills at engraving and designing US coins. During this time, he married Martha E. Jones in March of 1875 and would have a daughter named Edith. By 1877, 8 years later after first becoming an assistant, he was earning $4 per day wages. Martha would pass away in 1898 and Charles would marry Caroline Gaston on December 3, 1907.

On August 31, 1879, William passed away and a new Chief Engraver was needed. One major candidate was George T. Morgan, who had been working at the mint. During this time, the once popular seated liberty coin design was starting to become out of style after around half a century of being circulated. So there was a desire among the population and the US mint for a new design. So the US Treasury Department asked 10 artists and designers to submit their work, one designer and famous engraver was Augustus Saint Gaudens.

The 10 decided to write up terms and conditions that the Treasury had to agree to, or else they would not participate. The Treasury did not agree with the terms and decided to hold the contest to the public instead. This ended up in a massive failure and so the Treasury decided to rely on designers and workers at the Mint, which included Charles E. Barber, William Key and George T. Morgan. The Mint Director at the time, Edward O. Leech, ordered that these three create their designs and submit them for approval. Director Leech decided that Barber did the best job, and in the end, US President Rutherford B. Hayes appointed Charles Barber to the post of Chief Engraver at the Mint, succeeding his father William Barber.

One of the first coins that Barber designed was the $4 Gold Stella Coin. This coin was first produced in 1879 and only ran for about a year until 1880. It featured a liberty bust on the front of the coin with a flowing hair variety and coiled hair variety. The two designs were produced by Barber and also George T. Morgan. The reverse of the gold Stella featured a 5-pointed star designed by Barber with the words "400 CENTS" within the star and a Latin phrase "DEO EST GLORIA" below the US motto and "FOUR DOL." near the bottom rim of the coin, representing four dollars.

The word "Stella" itself describes a denomination of 4 dollars in US currency. The coin was originally designed as a pattern and as a way to explore the potential of joining the Latin Monetary Union. Congress rejected joining the international group, but not before a few hundred of these coins were produced and sold to US Congressmen. Nowadays in the coin collecting community and numismatic field, these coins are extremely rare and valuable, oftentimes worth $60,000 up to $1,000,000 to collectors depending on condition, year and variety. This was the only coin of its denomination ever produced in the US.

Depiction of the $4 Gold Stella Coin designed by Barber.

Three years later in 1883, Barber made his first major mainstream design: The Liberty Head 'V' Nickel. Due to production problems with the Shield Nickel, Barber was told to redesign a new coin. He was also instructed to design a new copper-nickel one cent coin and a three cent piece, but only the nickel was approved. It featured a liberty head facing left and a large Roman numeral 'V' on the reverse of the coin, signifying 5 Cents.

The original coin did not have the words "CENTS" on the bottom of the reverse near the rim, but later in 1883, the word "CENTS" was added. The reason for this change stemmed from a concern that since this coin had a similar diameter to the $5 gold half eagle coins, a criminal could gold-plate the nickel and pass it off as 5 dollars instead of 5 cents. Rumors went around that a man named Josh Tatum would go into a convenience store to buy an item for 5 Cents and hand the clerk a gold-plated 'V' nickel. He would end up receiving $4.95 in change. So this prompted a quick decision to add the words "CENTS" to the nickel to prevent fraudulent and confusing sales in the future. The coin was produced until 1913 when only 5 were minted that year, all of which are worth millions to collectors today. 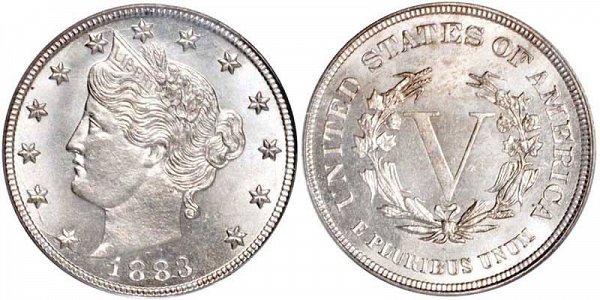 Beginning of the US Barber Coins

Charles Barber made his first design by plaster for a silver half dollar in 1891 and it was much different than what the Mint was requiring. Originally, it appears to be based on the British Una and Lion five pound coin that was issued for Queen Victoria in 1839. This isn't too unusual since the early seated liberty design was also inspired by England's coins in the past. This new coin featured a standing liberty named Columbia, with a sword in her right hand and a pole with the liberty's cap on it, in her left hand. Also on the obverse is a partly hidden eagle behind the liberty. The words "LIBERTY" were featured among stars on the rim of the coin, even with stars separating each of the letters. Lastly, "IN GOD WE TRUST" was within rays that originated from the lady Liberty.

The reverse of the coin featured wreath of agriculture with a small heraldic eagle with shield within the wreath. The eagle was holding the three arrows and olive branch, which it has in many older designs. It featured the "E Pluribus Unum" banner, rays extending from the eagle, stars above it's head and circular clouds. The design of this coin was spectacular and quite elaborate. A depiction of this prototype pattern coin is show below: 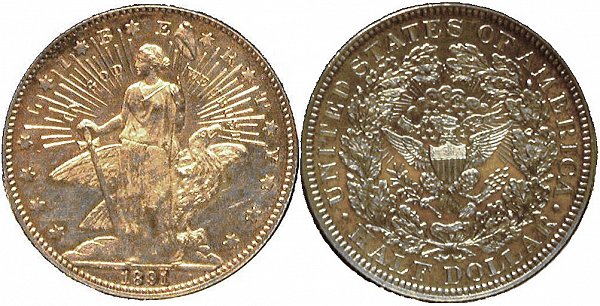 1891 Pattern Design of the Columbia Silver Half Dollar by Charles E. Barber.

Ultimately, this design was rejected by the director of the Mint. The original requirement was that Barber was supposed to design a French version or style of the Liberty (which was finally inspired by a 19th century 5-franc coin from France). In the end, the liberty design turned out being acceptable, but the director complained that the reverse of the coin with the eagle was too much like the first coin that Barber designed. A final pattern was designed and sent to US President Benjamin Harrison so that his administration could take a look at it and review it. Again, even the president was critical and said that the clouds on the back should be removed and that he wanted a more defined liberty design and motto on the reverse because they were susceptible to wearing out over a short time. The end result of the reverse of the coin looked much like his original 1891 design of the eagle and stars within the wreath, only the wreath was removed and everything within it was enlarged.

The reviews of the Barber coins by the public were mixed. Some people really enjoyed the new design, describing the liberty head as being one of the most beautiful designs in US history while the reverse of the eagle was similar to the first US coins. Others described it as "Emperor Vitellius having a goiter" and the eagle being malnourished. Charles Barber's designs were put on the silver dime, quarter and half dollar coins. It was practically the same exact design for the obverse liberty head, and so these coins became known as the Silver Barber Dimes, Silver Barber Quarters and Silver Barber Half Dollars. The quarter and half dollar looked nearly identical other than the diameter of the coin. Although the dime differed due to the reverse having a wreath with "ONE DIME" inscribed within it, instead of the eagle. All of these coins began being produced and circulated in 1892. The half dollars were produced until 1915 while the quarters and dimes lasted another year until 1916.

Depiction of the Silver Barber Dime design by Charles Barber. 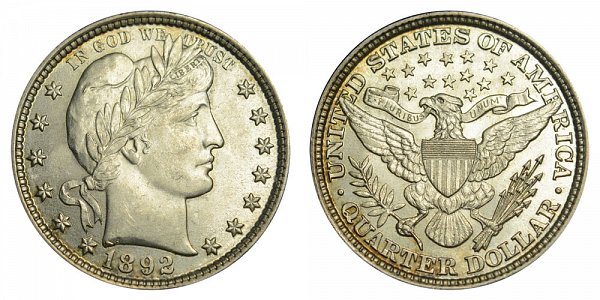 Depiction of the Silver Barber Quarter design by Charles Barber. 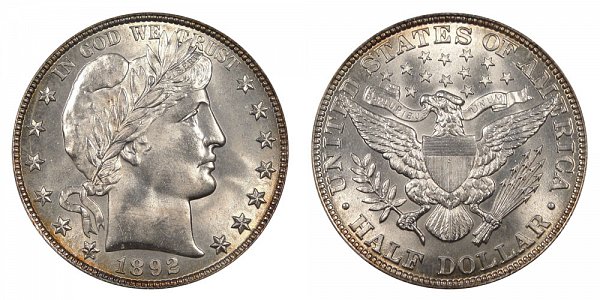 Depiction of the Silver Barber Half Dollar design by Charles Barber.

One of the most famous critics of Barber's silver coinage was President Theodore Roosevelt. He was involved in a private war with the US Mint between 1905 and 1907 and described Barber as an enemy within it. Roosevelt felt that the barber coinage was "insipid" and were far inferior to coins produced in European nations. Many artists, engravers and sculptors agreed with the president's views as well. Theodore Roosevelt felt that Augustus Saint Gaudens, who was currently not employed at the Mint, should design every US coin denomination. His criticism would eventually be applied by Saint Gaudens, who would produce the $20 Gold Saint Gauden's Double Eagle, particularly the MCMVII 1907 High Relief coin. This coin would be known as one of the most beautiful coins in not only US history, but also world history. Barber unsuccessfully attempted to halt the production of his rival's coins in 1908.

Barber also oversaw and took responsibility for the new Denver Coin Mint, which started as an assay office and became a major, official US Branch Mint in 1906, during his tenure as Chief Engraver.

Not only did Barber design coins for the United States, but he also designed silver coins for Hawaii in 1883, which was not a US state at the time. He also made coins for the countries of Venezuela and Cuba. Some coins included the 1892 Columbian half dollar (not to be confused with his Columbia-style Liberty US half dollar coin pattern of 1891), the 1893 Isabella Quarter and 1900 Lafayette Dollar as some of his major designs.

Charles Barber also produced countless other pattern coins that never made it into circulation. He had a collection of over 200 pattern coins collected over his 48 years at the Mint. Although, it is hard to tell which ones were designed solely by him and which ones were designed by other people that he worked with such as Morgan, Saint Gaudens, Longacre, Paquet and his father William. He even had 11 Saint Gaudens double eagle coins in his collection that his rival produced. Some of these coins were already known to be created by others besides Barber, or at least the front or back of the coins may be from Barber's work. He also produced commemorative type coins and medals. One of which commemorated the Louisiana Purchase of 1903 and was assisted by George Morgan.

One of the last coins that Barber designed was a Panama-Pacific $2.50 gold coin and silver half dollar. Charles E. Barber passed away on February 18, 1917 while he was still in office. None other than George T. Morgan would take over the position and become the seventh Chief Engraver of the US Mint.