Victor David Brenner was born on June 12, 1871 in Siauliai, Lithuania to Jewish parents. His original birth name was Viktoras Baranauskas, but this was changed in order to make it easier to gain citizenship in the United States. Victor moved to America in 1890 at the age of 19, and lived in New York City. At a young age, Victor's father had taught him the skills for gem and seal engraving along with sculpting. After he moved to America, those were the skills that helped him get by. Also, Brenner had to take classes at the Cooper Union in order to become proficient in English and later, he learned French as well. 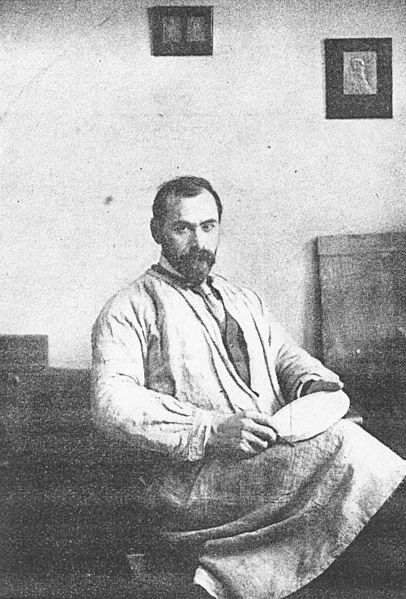 Photo Victor D. Brenner - Engraver and designer of the US Lincoln Cent.

After staying in the US for 8 years, Brenner decided to move to Paris, France to further his studies in the arts and medalist. He studied under the instruction of Oscar Roty of the Academie Julian school of art. He continued to hone his skills, become more experienced and eventually won awards during the 1900 Paris Exposition, which greatly helped build his reputation and name. He moved back to the US and had no problems furthering his career and receiving commissions and jobs.

Ironically, other famous US coin engravers, including Augustus Saint-Gaudens and Bela Lyon Pratt, had a similar career path of first moving to Paris to further their studies in art before moving back to the US to begin their major careers. Although unlike the two of them, Victor D. Brenner had always been interested in numismatics and was dedicated to the field. In fact, he joined the American Numismatic and Archaeological Society way back during November 18, 1894 only 4 years after first arriving in the US. After returning from Paris, Brenner became an instructor for the School for Die Cutting. He completed dies for fine medals in the private sector and also built up more recognition in the field.

US President Theodore Roosevelt requested in 1905 that Augustus Saint-Gaudens redesign all of the United States coinage. Saint-Gaudens was successful in designing the $10 Indian Head Gold Eagle and the $20 Gold Saint Gaudens Double Eagle, which were produced in 1907. He also produced a one cent piece, but it was never minted. Augustus died that same year in 1907, too soon to complete the redesign of all US coinage. Bela Lyon Pratt, a student of Saint-Gaudens was then commissioned in 1908 to redesign the $2.50 and $5 gold coins. President Roosevelt, who was very passionate about producing the most artistic and valuable coins in the nation, wanted a coin produced to celebrate the centennial of Abraham Lincoln's birthday of 1809. He rightly felt that Lincoln had been the savior of the nation and of the Union and considered himself to be Lincoln's heir in politics. Victor D. Brenner strongly supported Roosevelt's plan of having the first US president used on US coinage.

A few years earlier in 1907, Brenner had produced a very fine work of art portraying Lincoln on a medal and plaque. The next year in 1908, he had discussed his work with Roosevelt and both recognized that the Indian Head Cent was outdated and needed to be replaced anyways since it was already used for half a century. The plaque that Victor Brenner had produced was already brown in color and would look excellent on a brown cent. At the time, very few people knew of this plan. Finally, it was authorized that a 1909 Lincoln Wheat Cent was to be produced by the US Mint, commemorating the 100th Anniversary of Abraham Lincoln. 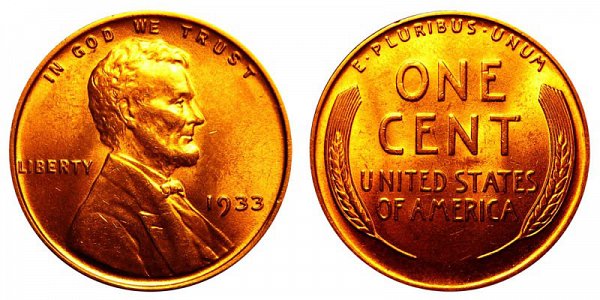 Design of the Lincoln Wheat Cent by Victor D. Brenner.

The original design was to feature Lincoln's head on the obverse and a simple sprig (a small branch or twig) in the center of the reverse of the coin, which would mimic French two franc coin of that country. Later, that design evolved to include a more American-like two ears of wheat stalks, one on each side with the words "ONE CENT" and "UNITED STATES OF AMERICA" between them. The coins were actually released to the public for circulation on August 2, 1909. Everyone was very enthusiastic about the new coins and collected them whenever they could. In fact, the Philadelphia Mint had to limit how coins each person could buy. The banks could only receive partial orders, the mint itself would sell only 2 per person and the sub-Treasury would only allow a maximum purchase of 100 of these new coins.

These new Lincoln wheat pennies did not come without criticism. The biggest complaint was that the initials of Victor D. Brenner (V.D.B.) were printed so prominently on the bottom rim on the reverse of the coin. Others felt that the reverse of the coin which featured the wheat ears, that the wheat itself did not look like the correct species. Obviously, many in the south did not like Abraham Lincoln on the coin at all, although many freed black slaves were eager to get these popular coins.

Ultimately, the coin was going to be recalled and redesigned due to the designer's initials VDB being displayed too prominently on the coin. Brenner insists that this was not an advertisement of his name, but rather it is as a way to teach future generations and students of history about who the artist was and the history of that time period. Only days after the coins were released, the American Numismatic Association held a meeting to discuss US coins. Thomas L. Elder, who was the chairman of the Coinage Improvement Committee, wrote the new US President William Howard Taft a letter of various recommendations to improve the coins. Unlike Roosevelt, President Taft was not interested in coins and so he ultimately signed off on the recommendation, which put an end to the 1909 VDB Lincoln Wheat Cent. 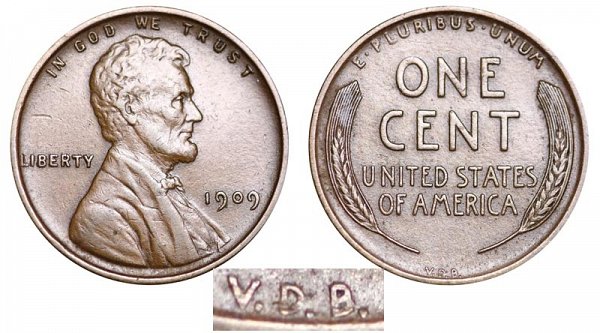 Design of original 1909 VDB Lincoln Wheat Cent by Victor D. Brenner. Note the V.D.B. initials on the bottom of the reverse of the coin.

The Lincoln head cent continued being minted without the VDB initials on the reverse until 1918. During this year, the mint allowed the initials of Victor D. Brenner to be included back on the coin, except that the VDB would now appear under Lincoln's shoulders on the obverse of the coin and the lettering would be much smaller. The design of the coin continued until 1958 when the wheat ears on the reverse would be replaced with the Lincoln Memorial. This coin would become known as the Lincoln Memorial Cent, which featured Brenner's same Lincoln design on the front, but with Frank Gasparro's memorial design on the back.

The 1909 VDB cent was minted in a large number by the Philadelphia Mint, none were minted in Denver and very few were minted at the San Francisco Mint. The rare 1909 S VDB coin is one of the most famous key dates for coin collectors. A worn out coin in good condition is worth over $750 and is worth thousands in uncirculated grade. Victor D. Brenner passed away on April 1st, 1924. His legacy is well known on earth and beyond. One 1909 VDB Lincoln US cent was placed on a calibration device onboard the US Mars Curiosity Rover, which is currently located on the surface of Mars! 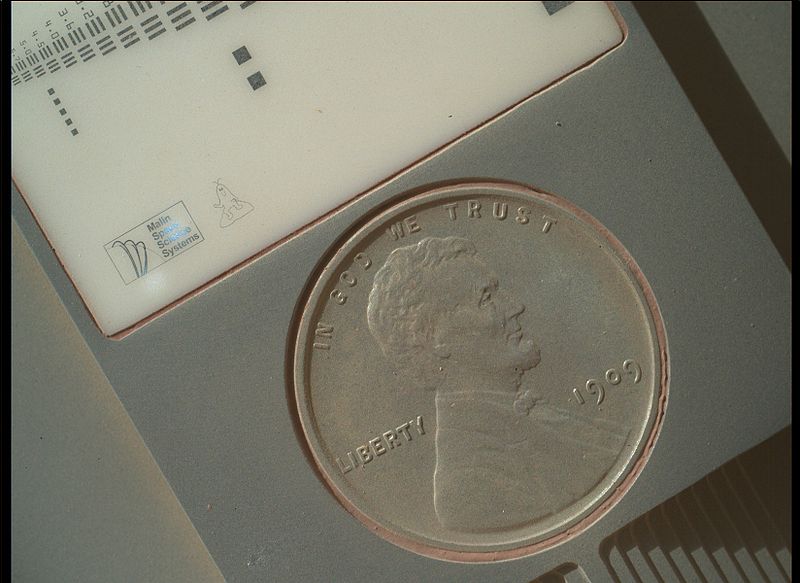 Photo of the 1909 VDB Lincoln Cent on the Mars Rover - US Penny on Mars!