One of the lesser known US branch mints is the Charlotte Mint of Mecklenburg County in North Carolina. This mint was established on March 3 of 1835 due to the growing Carolina Gold Rush. In fact, the first gold mine of the United States was called Reed Gold Mine, based in North Carolina. This mint came into existence at the same time as the New Orleans Mint in Louisiana and the Dahlonega Mint in Georgia through an Act of Law that President Andrew Jackson signed on this same date. 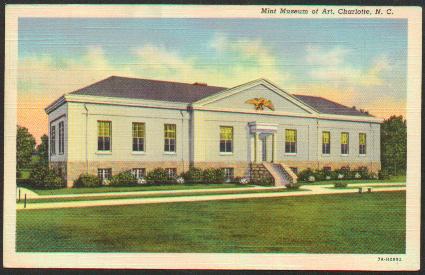 The construction of this mint did not begin until 1836 and opened up for coin production on July 27 of 1837. All of the coins produced here were struck from the refined gold ore brought in from the gold rush until March 28 of 1838. The first coin minted here was the $5 Gold Half Eagle Liberty Without Turban coin. During that same year, the minted some $2.50 Gold Quarter Eagle Liberty Without Turban varieties. In 1849, the Charlotte Mint produced Liberty Head Gold Dollars. All of the coins bear the "C" mintmark and there was over $5 million worth of gold coins minted here.

North Carolina seceded from the Union in the month of May, 1861. As a result of this act, the Confederacy took over the mint and began minting coins as well. Eventually, they ran out of bullion and turned the building into military space and a hospital for their troops throughout the rest of the war. These same offices were used by the Union troops during some of the early years of the Reconstruction period after the war. When 1867 came along, the government turned it into an assay office. The Charlotte Assay Office requested permission to be turned back into a branch mint but it was denied.

So Charlotte continued assay office work and coining up until 1913 when the gold started to disappear. Eventually it became a Red Cross station that was used during World War I and between 1917 and 1919, the Charlotte Women's Club used to meet up in this same building as well. By the time 1931 came around, the building was set to be demolished so that the post office could expand. Private citizens successfully got control of the building from the US Treasury in 1933 and decided to relocate the building. The building became the "Mint Museum of Art", which was the first art museum founded in the state of North Carolina. They displayed a variety of artworks and a completed gold coin collection from the mint.

Many coin collectors have never heard of the Charlotte mint and the coins minted here are just as scarce and unknown. This makes them extremely sought-after and they are extremely valuable.

Interesting Facts and Coin Statistics of the Charlotte Mint

Total Number of US Coins Ever Minted in Charlotte = 1,206,538
Over 1 million coins were minted in Charlotte and that only includes the official US currencies and not assay office coin mintages. These figures come from adding up all of the mintages in our database from this particular mint, which does not include the coins that had "N/A" or unknown mint figures. So the number above is conservative and the total number of coins ever minted in Charlotte throughout the entire history of the United States of America is at least this much! Also, because of the rarity of these kinds of coins, many of them are worth much much more than their weight in gold.