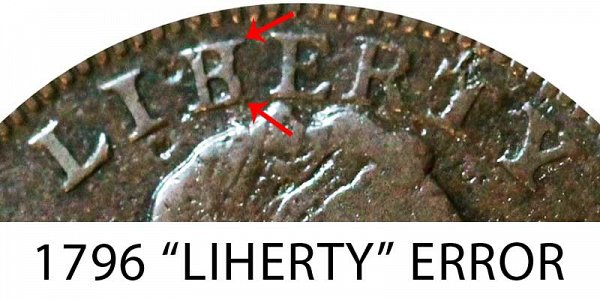 One major variety deals with the word 'LIBERTY' on the obverse of the 1796 Draped Bust Large Cent (Penny). This coin was once struck at an earlier time with a mistakenly inverted letter "B" in the die. The coin was struck a second time once this mistake was corrected. So it's actually a "B" struck over an inverted "B". This resulted in two extra serifs appear on the right side of the "B" and this makes it look partially like a letter "H". The end result was the word looked somewhat like the misspelling: "LIHERTY". An example image of this is depicted above.