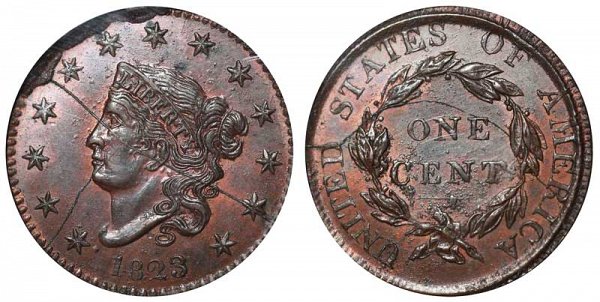 One major variety is the Unofficial Restrike of the 1823 Coronet Head Large Cent (Penny). This coin was produced by muled dies (combining dies that were never meant to be together) consisting of the 1823 obverse die and 1813 reverse die. These coins were not struck officially at the mint. Rather these broken dies were sold for iron scrap to a man named Joseph Mickley in the 1830s. Mickley acquired many of these broken dies and produced a variety of coins by muling dies and evening mixed denominations. This 1823 restrike was produced using very rusted and cracked dies which make it easy to identify. The coins were probably struck sometime in the 1860s-1870s. Some of these were even produced in silver.

USA Coin Book Estimated Value of 1823 Coronet Liberty Head Large Cent (Unoffical Restrike - Broken Die Variety) is Worth $75 in Average Condition and can be Worth $1,320 to $1,629 or more in Uncirculated (MS+) Mint Condition. Click here to Learn How to use Coin Price Charts. Also, click here to Learn About Grading Coins. The Melt Value shown below is how Valuable the Coin's Metal is Worth (bare minimum value of coin). Click here to see the Melt Value of every US Coin.