There were multiple varieties of the 1934 Washington Silver Quarter. Three of them deal with different styles of the motto "IN GOD WE TRUST" on the obverse of the coin. The Light Motto variety features very blurry and indistinct lettering. The Medium Motto has much clearer lettering but the letters themselves are thinner than the Heavy Motto variety. The middle of the "W" in "WE" is also aligned lower than the top of the sides of the "W". The Heavy Motto is also struck strongly and clearly but the letters are much thicker and the middle of the "W" is aligned higher with the tops of the sides of the "W". The differences and comparison between these varieties is depicted above in the example image.

Another variety is actually a doubled die error on the obverse of the coin. The motto "IN GOD WE TRUST" is doubled and the doubling of the letters is very prominent and easy to identify. An example of the 1934 quarter doubled die error is depicted below in the example image: 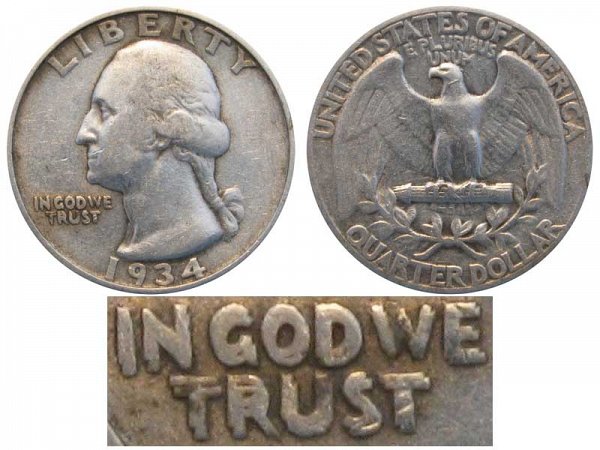