Half Dol on Reverse 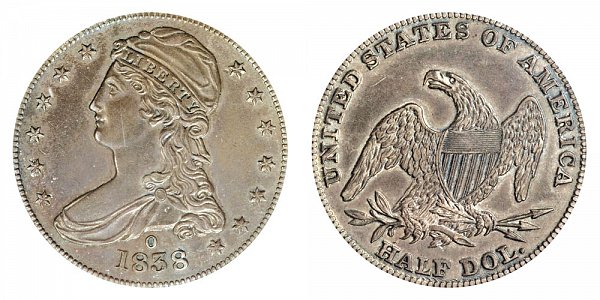 The 1838-O Capped Bust Half Dollar is one of the rarest and most valuable varieties of US coins. This coin was one of the first coins struck at the newly opened New Orleans Branch Mint. Only around 20 or less of these coins were ever produced as the new Mint was having various breakdown problems and getting the new equipment fine-tuned. The general view is that only dimes and half dimes were actually produced in 1838. These 1838-O half dollars were actually produced in early 1839 (sometime between the months of January and March) using the old die - which is why so few of them were produced. Eventually the 1838-O obverse die was defaced and the new 1839-O die was used to begin striking new half dollars in April of that year. These extremely rare coins are worth hundreds of thousands of dollars each! Source of example image is courtesy of Heritage Auction Galleries.

USA Coin Book Estimated Value of 1838-O Capped Bust Half Dollar is Worth $375,291 in Average Condition and can be Worth $551,008 to $854,888 or more in Uncirculated (MS+) Mint Condition. Proof Coins can be Worth $865,577 or more. Click here to Learn How to use Coin Price Charts. Also, click here to Learn About Grading Coins. The Melt Value shown below is how Valuable the Coin's Metal is Worth (bare minimum value of coin). Click here to see the Melt Value of every US Coin.

1836 Half Dollar: All Varieties

1836 Half Dollar: Beaded Border on Reverse