The third Chief Engraver of the US mint was Christian Gobrecht, who succeeded William Kneass and was responsible for the popular Seated Liberty design on early US coins. Gobrecht was born on December 23, 1785 in Hanover Pennsylvania. His father John C. Gobrecht came to America in 1755 from Germany. Christian grew up learning the trade of clockworks and engraving ornamental clocks as an apprentice in Manheim, Pennsylvania and later worked in Baltimore, Maryland. In 1811, Gobrecht moved to Philadelphia and joined another popular engraving bank-note firm called Murray, Draper, Fairman and Company in 1816. Earlier in 1810, he invented his own medal ruling machine and later improved it in 1817. He earned much respect through those years as an engraver and sculptor. 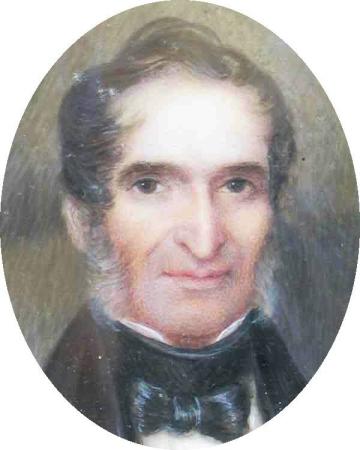 Portrait of US coin designer and engraver, Christian Gobrecht.

Since Gobrecht was so experienced in engraving, his works caught the eye of Robert Patterson, who was the current Director of the US mint and was asked to become an assistant director in 1823. Gobrecht actually declined the position, but later that year in December, he tried to get a position as the Chief Engraver after the first Chief Engraver Robert Scot passed away. He even wrote President James Monroe requesting the position, but William Kneass actually got the position and became the second Chief Engraver with a $1200/yr salary as he had more connections. He was offered another position of assistant engraver with a $600/yr salary as a consolation, but he declined the offer. Still, Gobrecht did keep a relationship with the mint and did work on providing pattern dies to the mint in 1826 and sold letter, numerical and figure punches for engraving at the Mint.

On August 27, 1835, William Kneass suffered from a debilitating stroke and he was unable to complete his work. Gobrecht was then made an assistant for Kneass or Second Engraver where he would then be in charge of completing all of the pattern and die work. During this time in 1836, Christian Gobrecht designed his own silver dollar coin that went into general circulation, called the Gobrecht Silver Dollar, which only lasted 3 years until 1839. These dollars are rare, not many of them were minted, so they are quite valuable today. 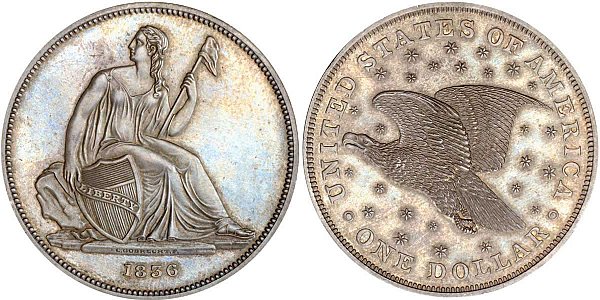 Design of the Silver Gobrecht Dollar by Christian Gobrecht.

In 1840, William Kneass passes away and Christian Gobrecht would become appointed to the position of Chief Engraver of the United States Mint. During this time period as the country was expanding, many folks were bored of decades of the same coin designs and wanted a fresh change in their coins. Five years beforehand in March of 1835, Legislators and the President of the United States signed into law the authority to build 3 more new mints in addition to the original Philadelphia Mint. The new expansion included the Charlotte Mint, Dahlonega Mint and New Orleans Mint. This was a time when Gobrecht was also welcomed to help with the increase in workload.

Christian Gobrecht is most famous for producing the Seated Liberty coins of various denominations. These coins were inspired by sketches drawn up by Thomas Sully and Titian Peale and the concept was created by Robert Patterson in 1835. The obverse front of the coin was to have an American version of Britain's icon, the Britannia, while the reverse or back of the coin would have a heraldic eagle with a shield and holding the arrows and olive branch. The final design as a pattern form was completed in 1836, which was the first year that any Seated Liberty coin was minted after President Andrew Jackson approved it. The design would then be used in hundreds of pattern varieties over the course of the 19th century, all the way up until 1891.

Going back to the Gobrecht Dollar, it was the first seated liberty design, which was struck with hardened dies. Robert Patterson wanted to "test" this coin out by circulating it amongst the elite and educated people of Philadelphia to get some feedback on it. It was Patterson's belief that a nation would be judged by the artistic and design quality of it's largest silver coin. His primary goal was to make the United States the highest quality producers and designers of coinage in the world. In total, 1000 Gobrecht dollars of many varieties and variations were minted in 1836.

Unfortunately, a reporter for the media newspaper got a hold of one of these Gobrecht Dollars and made a critical analysis and publication on it. The story was against the idea that Gobrecht signed his personal name "C. GOBRECHT. F." so prominently on the obverse of the coin, just above the date but below the base of the liberty. This stands for "Christian Gobrecht F. where the "F." is Latin for Fecit, which means "he made it". It's the only type of coin ever made where the engraver's entire last name was so obvious and easy to read as if it were a motto! Most coins had at the very maximum, extremely small initials of the engraver minted. Due to the uproar, Patterson quickly ordered that the obverse be changed to make Gobrecht's name less noticeable by placing "C. GOBRECHT F." within the base of the liberty. This was during 1836 and no coins were produced in 1837. In 1838 through it's last year of production in 1839, the "C. GOBRECHT. F." lettering was completely omitted from the silver dollar. Below is some images of each of these major varieties. 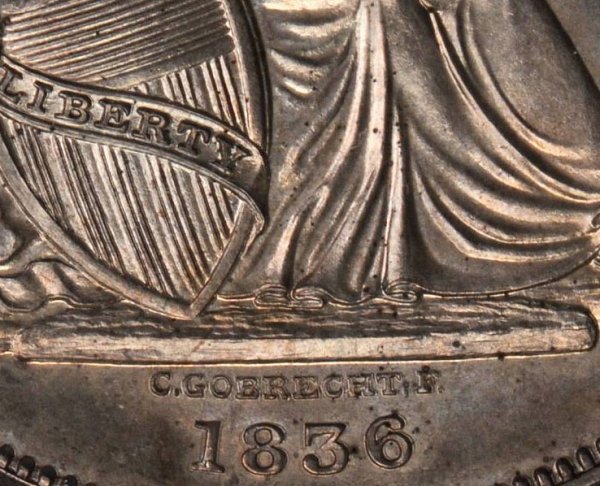 C. GOBRECHT. F. lettering under base of liberty in 1836 Gobrecht Dollar 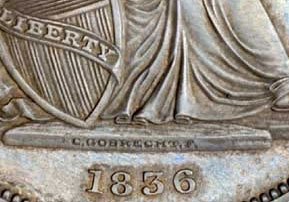 C. GOBRECHT. F. lettering later moved inside base of liberty in 1836 Gobrecht Dollar 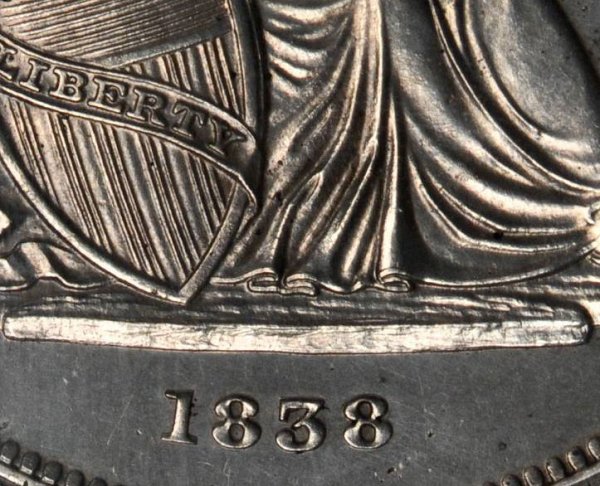 Throughout the production of the Gobrecht dollar, the reverse of the coin consisted of a flying eagle of different variations. Some coins had a flying eagle on a plain field while others had the eagle in a field of stars. Even the edges of this coin switched between a reeded edge and a plain edge. This eagle design is actually the inspiration behind the Flying Eagle Cent, which was the first small cent ever produced.

The next dollar coin would be the Seated Liberty Silver Dollar (with ONE DOL. on reverse), which was first produced in 1840. It had the same seated liberty design as the Gobrecht dollar, but the eagle was changed to a heraldic eagle. Other popular silver coins were designed by Gobrecht, including the Seated Liberty Half Dime, Seated Liberty Dime, Seated Liberty Quarter (with QUAR. DOL. on the reverse) and Seated Liberty Half Dollar. (with HALF DOL. on reverse) The seated liberty design would actually be the last one for the half dime, which would no longer be produced after 1873. The half dime and dime had a wreath design on the reverse while the quarter, half dollar and dollar had the heraldic eagle. There were many different variations of these coins including motto changes where coins had no motto or a motto added later on. Rays were added to the eagle reverses as well as arrows on each side of the date on the obverse. Also, stars were either added or removed from the rim on some coins. 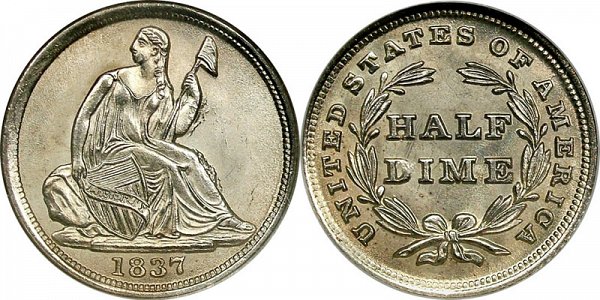 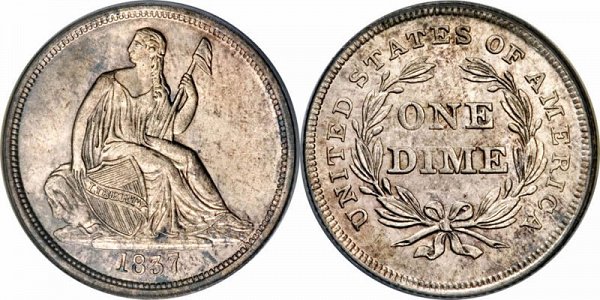 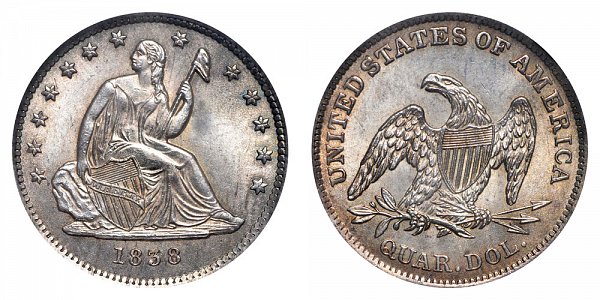 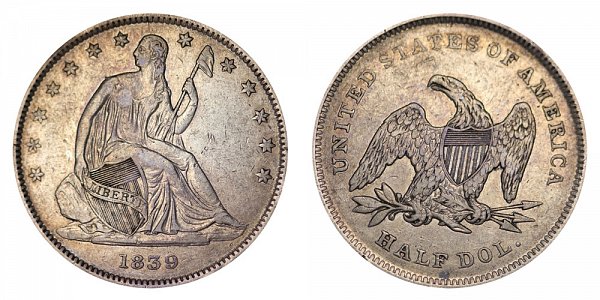 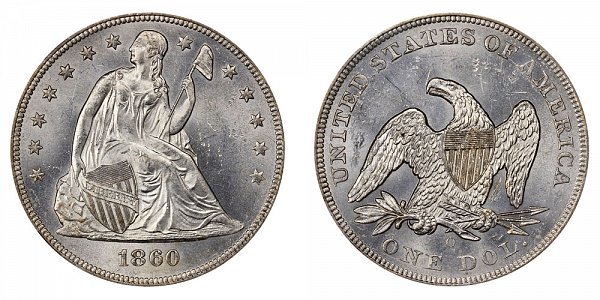 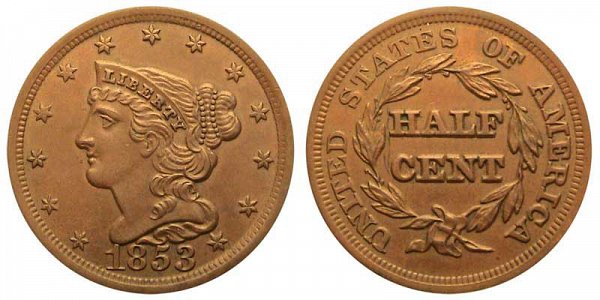 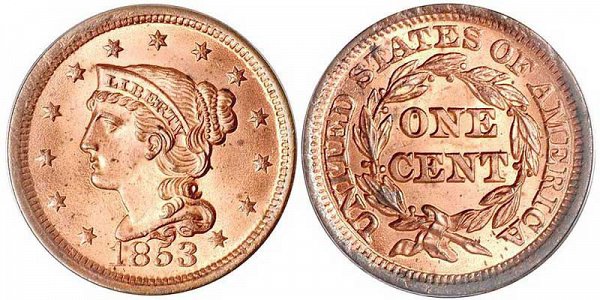 In addition, Gobrecht was also responsible for the obverse design of the only US 20 Cent Piece ever made from the years 1875-1878. The US Twenty Cent piece used the Gobrecht's seated liberty design long after he had passed away, but William Barber completed the reverse design of the coin. 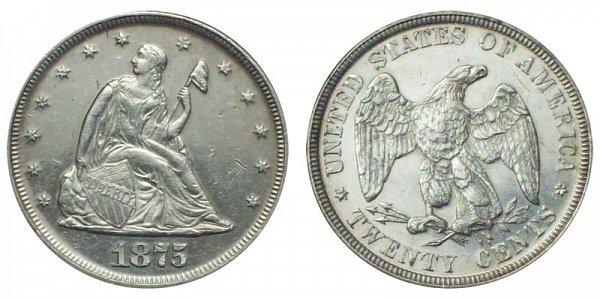 Gobrecht's seated liberty design on the only US twenty cent piece ever made.

Lastly, Christian Gobrecht also designed three major gold coins, which included the $2.50 Gold Coronet Head Quarter Eagle, $5 Gold Coronet Head Half Eagle and $10 Gold Coronet Head Eagle coins. All three of these eagle coins lasted an exceptionally long time, nearly 70 years of minting starting from between 1838-1840 up until 1907. There were a few changes and variations like with his other seated liberty coins where the motto would be added or removed, or small changes to the style of liberty's head would be made to these gold coins over time. 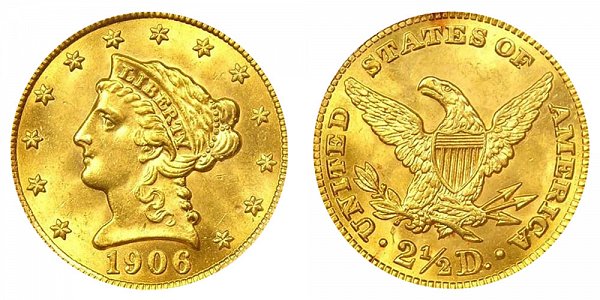 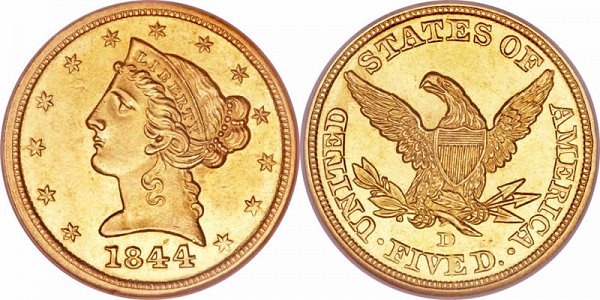 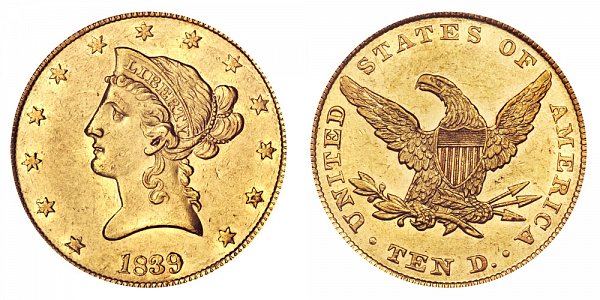 The Coronet or Braided Hair liberty design was actually first used for the $10 gold coin, which started in 1838. Then he used it for the half cent and large cent afterwards and then went back to the gold $2.50 and $5 gold coins in that order. Unfortunately, Gobrecht did not live very long after designing his coins. He was only chief engraver of the mint for 4 years until July 23, 1844 when he passed away, which lead to James Longacre becoming the next Chief Engraver. Gobrecht would be one of the most renowned engravers in US and numismatic history, producing some of the most collectible coins in existence in the US. One of the most famous engravers of one of the most beautiful coins ever made, Augustus Saint Gaudens, once said that he was so impressed with Gobrecht's work that "if I carried out with some modifications, nothing better could be done", a tremendous compliment.