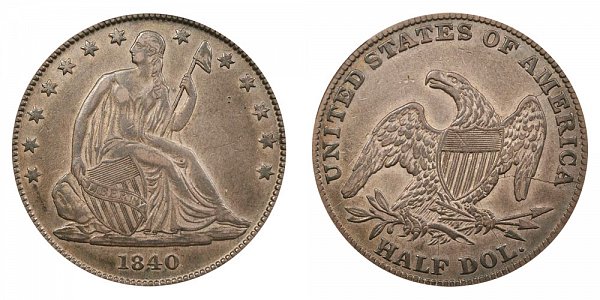 One major variety of the 1840 Seated Liberty Half Dollar features the reverse of 1838 design which included a larger eagle and medium sized letters as depicted above. This coin is highly unusual because it was minted in New Orleans but does not have an "O" mint mark. It was discovered that the New Orleans mint was trying to save money by using an older die from the reverse of the 1838 Capped Bust Half Dollar. Although this older coin had the "O" mint mark on the obverse of the coin - not on the reverse. When they used the older die on the newer coin - it resulted in no "O" mint mark on either side of the coin. (Do not get this rare variety confused with the coins minted at the Philadelphia Mint - which by tradition did not put mintmarks on their older coins!)

The variety with the small letters was actually struck using a die from the reverse of a newer 1839 half dollar and was produced in Philadelphia. Typically any coin without a mint mark is assumed to be minted at the Primary Philadelphia Mint. The difference between the 1840 Medium Letters vs Small Letters (Reverse of 1838 vs Reverse of 1839) is depicted below in the example comparison image of the coins: 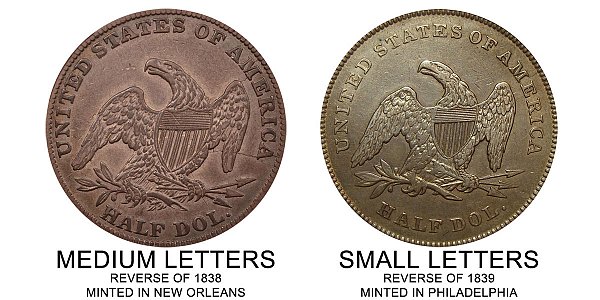 USA Coin Book Estimated Value of 1840-O Seated Liberty Half Dollar (Medium Letters - Reverse of 1838 - No Mintmark Variety) is Worth $220 in Average Condition and can be Worth $4,261 to $8,511 or more in Uncirculated (MS+) Mint Condition. Click here to Learn How to use Coin Price Charts. Also, click here to Learn About Grading Coins. The Melt Value shown below is how Valuable the Coin's Metal is Worth (bare minimum value of coin). Click here to see the Melt Value of every US Coin.

1839 Half Dollar: Drapery From Elbow

1839 Half Dollar: No Drapery From Elbow