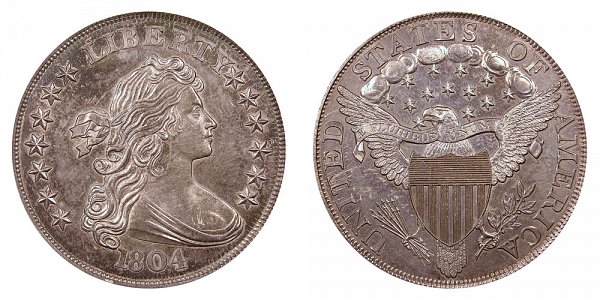 This variety of the 1804 Draped Bust Silver Dollar is a Restrike Proof with the Class II (Class 2) reverse. The "original" coin was actually produced in 1834 and 1835. These restrikes were illegally produced by Mint employee Theodore Eckheldt starting in 1859 and intended for collectors. Eckheldt originally produced 10-15 Class II restrikes but they were later tracked down and destroyed - except for one coin. Only 1 of these are known to exist - making this a Unique coin and one of the absolute rarest and most popular US coins in existence. What makes this coin different than the Class III (Class 3) variety is that the Class 2 coin has a plain smooth edge while the Class 3 has a lettered edge. This one-of-a-kind coin currently resides at the Smithsonian Institute and is considered priceless! It was alleged that Eckheldt produced this unique coin by striking 1804 dies over a modified 1857-dated Swiss Shooting Thaler coin (originally produced for the Bern Shooting Festival). The example image above depicts the actual coin itself.

The difference between the Original Class I and Restrikes Class II/III varieties has to do with a slightly different design on the reverse of the coin. The Class I variety features the words "STATES" and "OF" spaced more closely together. Class II and Class III both share the same design but the words "STATES" and "OF" are more widely spaced apart - making it easily distinguishable from the Class I variety. The difference between Class II vs Class III design is extremely subtle. The easiest way to distinguish the two is to view the edge of the coin. Class II has a plain smooth edge with no lettering while the Class III variety has a lettered edge. The difference between the 1804 Class I vs Class II & III Draped Bust Silver Dollar varieties (Original vs Restrike) is depicted below in the example comparison image: 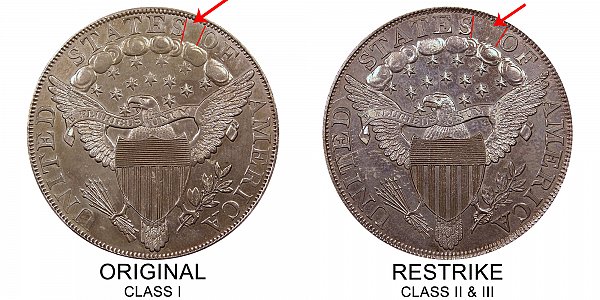