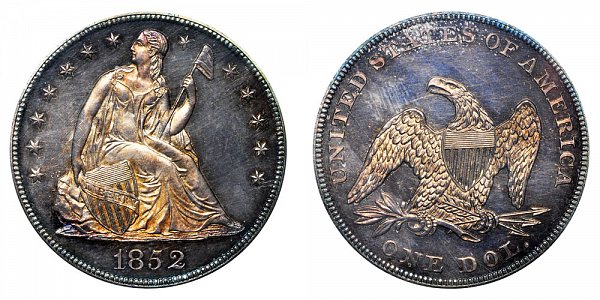 One major variety of the 1852 Seated Liberty Silver Dollar features the Original Strike version of the coin (as depicted above).

Only 1100 Original strike coins were ever produced. Years later there was a Restrike of these coins for collectors since the original was so scarce. Only around 35 restrikes are estimated to exist.

The difference between the 1852 Original vs Restrike Seated Liberty Silver Dollar is extremely difficult to distinguish - possibly the most difficult of all US coin varieties. It turns out that the same exact Obverse die was used on all original and restrike coins. However: All business strikes are actually original versions - there were no business strikes of the "Restrike" version - all restrikes are proof coins. The difficulty then lies in determining the difference between the original and restrike Proof coins.

Since the same obverse die is used on all 1852 dollars - the difference then needs to be found by observing the reverse of the coin. Dave Bowers (world renowned numismatist) published a book called Silver Dollar Encyclopedia in 1993. He describes 6 different varieties - 3 were used in the original coin strike and 3 were used for restrikes. Although Bowers also stated for one variety that even he is not completely certain if it is an original or restrike. David Akers (another world renowned numismatist) stated in his Pittman catalog that he was convinced that there were no Original Proof issues at all - that all proof dollar coins of this year are restrikes... It could even be possible that what is thought to be an Original Proof is actually a very high quality proof-like business strike due to polished dies and Restrikes could be true proof coins with a slightly higher-quality strike.

Unfortunately there isn't enough research and study to make a definite conclusion yet regarding the differences between the original and restrike 1852 Seated Liberty Silver Dollar. However: depicted below is an example image depicting the difference between the Original vs Restrike versions (both coins were graded by NGC): 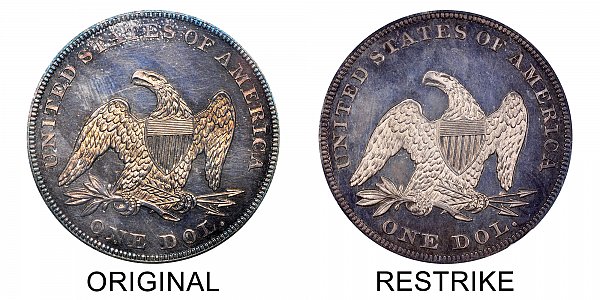 USA Coin Book Estimated Value of 1852 Seated Liberty Silver Dollar (Original Variety) is Worth $6,691 in Average Condition and can be Worth $45,569 to $89,839 or more in Uncirculated (MS+) Mint Condition. Proof Coins can be Worth $49,664 or more. Click here to Learn How to use Coin Price Charts. Also, click here to Learn About Grading Coins. The Melt Value shown below is how Valuable the Coin's Metal is Worth (bare minimum value of coin). Click here to see the Melt Value of every US Coin.