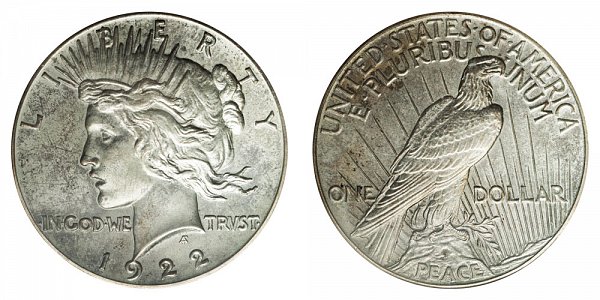 One extremely rare and valuable variety is the 1922 High Relief Peace Dollar. Most 1922 Peace dollars are Normal Relief. So their features are not as sharp and they don't stand out as much. In the previous year - All 1921 Peace Dollars were High Relief. The US Mint found that this original high relief design produced a higher quality and more beautiful coin but it caused more wear and tear on the dies that produce the coins - which had to be replaced often. So early in 1922: The US Mint decided it was more practical to produce dies that resulted in a coin design with lower relief and lower quality for general circulation.

The US Mint originally produced 35401 of these 1922 High Relief coins (mostly non-proof business strikes intended for general circulation) before going to a Normal relief design. Nearly all of these high relief coins were melted down a short time later by the US Mint. Only about 10 to 12 High Relief 1922 Proof (Matte Proof) Peace Dollars are estimated to exist. One stray non-proof business strike coin also exists! 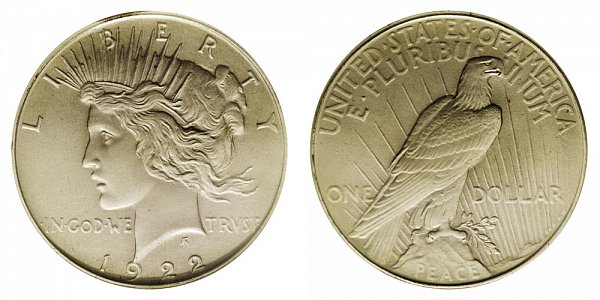 It is quite easy to identify the differences between the high relief and low relief coins. Both the obverse (front) and reverse (back) of the coin have differences. On the obverse of the coin: The numbers in the date and letters appear thicker on the high relief variety - even the spikes coming off the liberty crown are noticeably thicker. Although on the normal relief variety the spikes are longer and thinner with one small extra spike between the two left-most spikes. These features are depicted by the arrows in the example image below (Notice how much longer and thinner the spikes are near the letter "E" in the word "LIBERTY" on the Normal Relief variety vs the shorter spikes on the High Relief variety): 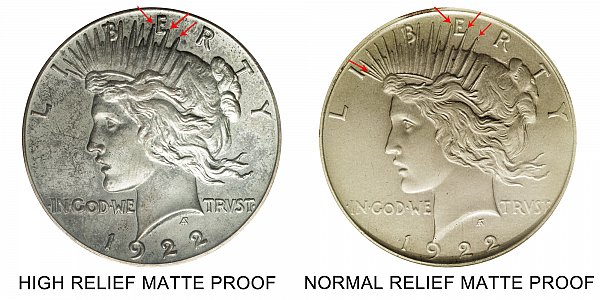 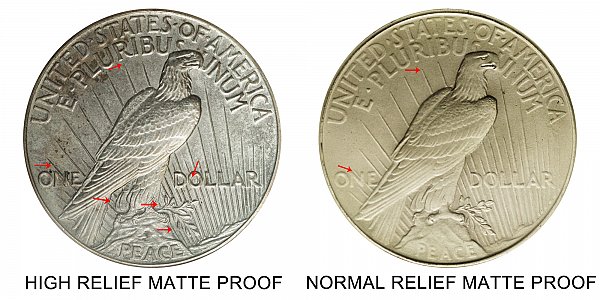