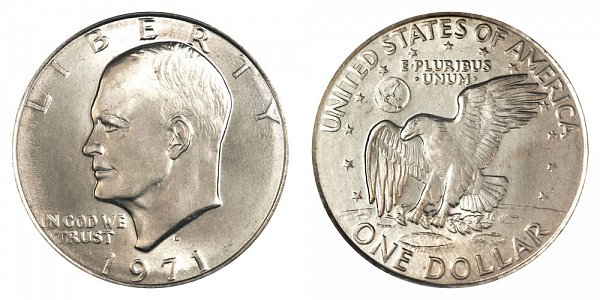 One major variety of the 1971-D Eisenhower Dollar is the Type 2 "Common reverse" variety - which is sometimes known as Variety 2 or RDV-001.

It is fairly easy to identify this coin as there are three features on the reverse to look at to distinguish it from the rarer "Friendly Eagle" Type 1 variety. The common reverse (type 2) features an eagle with a browline above the eye. Although "Friendly Eagle" (type 1) is missing this browline above the eye - giving the eagle a less foreboding and more friendly appearance. The difference between the friendly eagle vs common eagle is depicted below in the example comparison image: 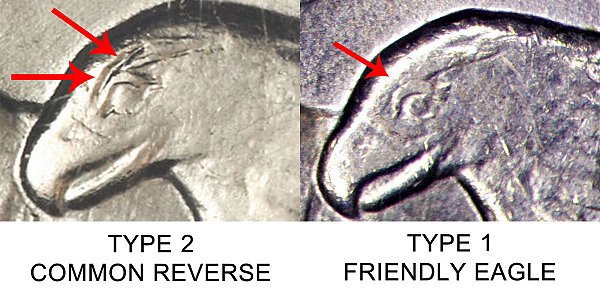 Another feature to look at is the portrait of the planet earth in the background of the coin. This is actually one of the easiest ways to identify the 1971-D type 1 vs type 2 varieties of this coin. Both varieties depict United States mainland and the Caribbean islands. The Gulf of Mexico is not as round and has a different shape in the type 2 reverse - While the friendly eagle reverse (type 1) features a rounder and more open Gulf of Mexico. 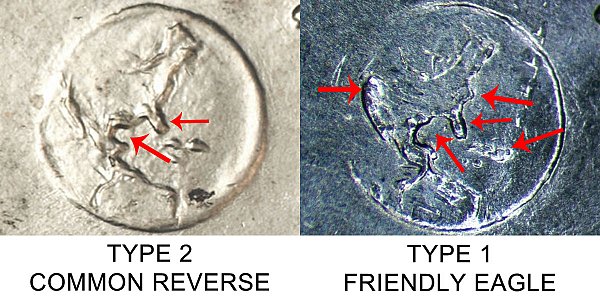 The last major feature to look at is the crater located between the letters "L" and "A" in the word "DOLLAR". The Type 1 Friendly Eagle variety features a much more detailed crater and has been modified with accented crater lines (the other craters also have slightly more detail as well). There are more debris lines extending downward from the crater rim. The smaller crater located just to the upper-right of this crater has a large rock located in the middle of the base of the crater. The type 2 common reverse does not have these detailed features around the craters. The difference between the 1971-D Type 1 vs Type 2 Craters are depicted below in the example comparison image: 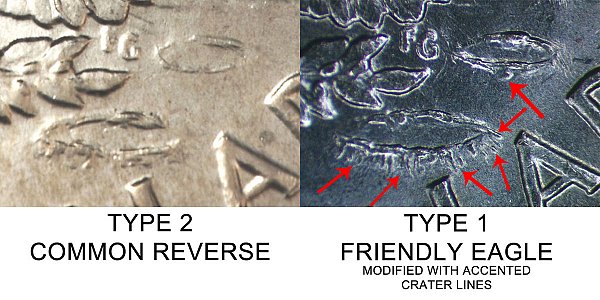