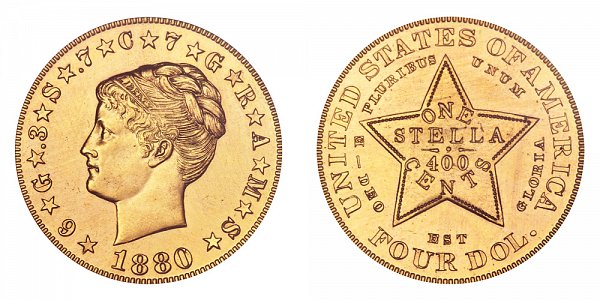 There were two major varieties of the 1880 Stella $4 Gold Coin. The ultra-rare variety featured coiled hair in the liberty portrait on the obverse of the coin (as depicted above) - while the slightly more common variety had flowing hair.

These $4 Four Dollar gold coins are extremely rare and uncommon as they were produced only in 1879 and 1880 (with 1880 even more uncommon). The official name of the coin was "Stella" - to describe the four dollar denomination. It was intended by the US Mint that this coin would be universally exchangeable with any other currency in the world. It was originally designed as a pattern and as a way to explore the potential of joining the Latin Monetary Union during this time period. Congress eventually scrapped the idea of joining the international group and the few hundred coins that were produce were sold to congressmen. 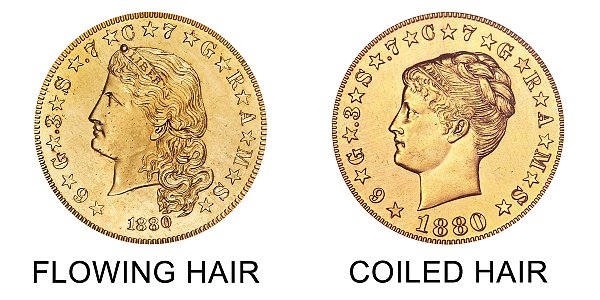 USA Coin Book Estimated Value of 1880 Stella Gold $4 (Coiled Hair Variety) is Worth $741,487 or more in Uncirculated (MS+) Mint Condition. Proof coins can be worth $1,677,580 or more. Click here to Learn How to use Coin Price Charts. Also, click here to Learn About Grading Coins. The Melt Value shown below is how Valuable the Coin's Metal is Worth (bare minimum value of coin). Click here to see the Melt Value of every US Coin.