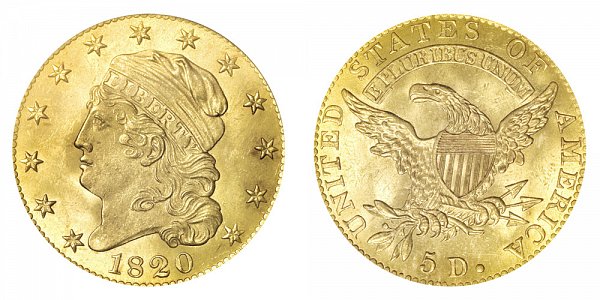 There were a few major varieties of the 1820 $5 Gold Capped Bust Gold Half Eagle. Depicted above is the Curl Base 2 - Large Letters variety (Source of example image is courtesy of Heritage Auction Galleries).

There were two major varieties dealing with the styling of the number "2" in the 1820 date on the obverse of the coin. One variety featured a curled or curved base on the number "2" while the other have a flat square base. The differences between the Curl Base 2 vs Square Base 2 is depicted below in the example comparison image: 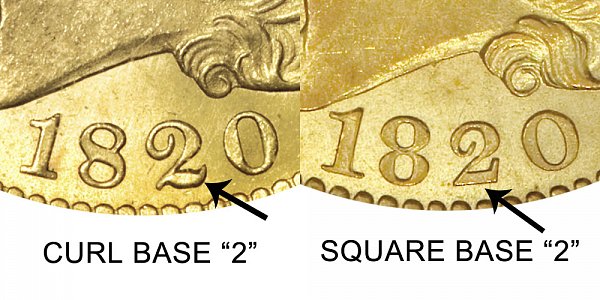 The Curl Base 2 variety also features two sub varieties dealing with the size of the lettering on the reverse of the coin. One variety features smaller letters in the words "UNITED STATES OF AMERICA" while the other variety features slightly larger letters. The best way to identify the varieties is to look at the letter "T". In the Large Letters variety - all of the letter T's are noticeably larger and also features a distinct and defective "pock mark" at the bottom of each letter "T". The difference between the Small Letters vs Large Letters varieties is depicted below in the example comparison image: 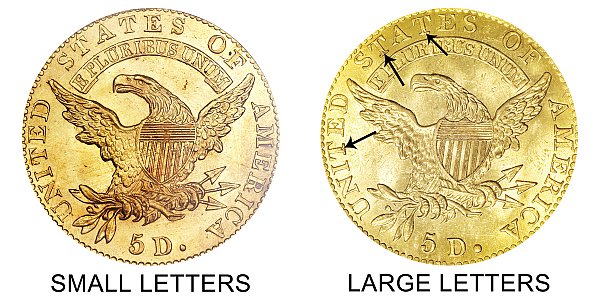 USA Coin Book Estimated Value of 1820 Capped Bust Gold $5 Half Eagle (Curl Base 2 - Large Letters Variety) is Worth $5,937 in Average Condition and can be Worth $20,753 to $45,788 or more in Uncirculated (MS+) Mint Condition. Click here to Learn How to use Coin Price Charts. Also, click here to Learn About Grading Coins. The Melt Value shown below is how Valuable the Coin's Metal is Worth (bare minimum value of coin). Click here to see the Melt Value of every US Coin.