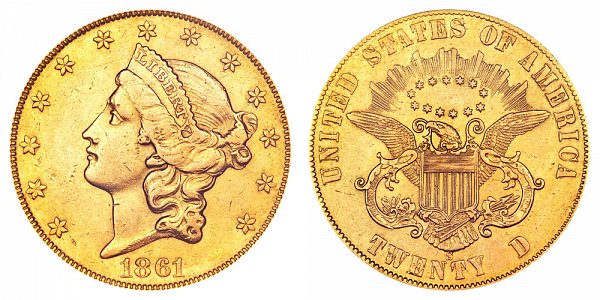 There were two major varieties of the 1861-S Liberty Head $20 Gold Double Eagle. The rarer variety is known as the "Paquet Reverse" variety while the common variety features the normal design on the reverse of the coin.

19250 San Francisco-minted "Paquet Reverse" coins are struck - each one is worth many times more than the normal design coins struck that year. The Paquet Reverse was designed by Anthony C. Paquet - who produced a modified version of the reverse of the original coin with a larger field and narrower rim on the reverse of the coin. The letters are taller with less space between them as well. The rays above the eagle were moved closer to the letters and the circle of stars was wider and more open. This was intended to become the new standard for all future years - but it was canceled due to fears that the narrow rim and wider field would cause the dies to fail prematurely. 19250 Paquet coins were struck in San Francisco - although only 2 are known to have been struck in Philadelphia (without an "S" mint mark) - each are worth over a million dollars.

The difference between the Normal Reverse vs Paquet Reverse is depicted below in the example comparison image. Note the styling and size differences in the letters along with the "S" mint mark - and also the rays within the circle of stars above the eagle (Source of example image is courtesy of Heritage Auction Galleries): 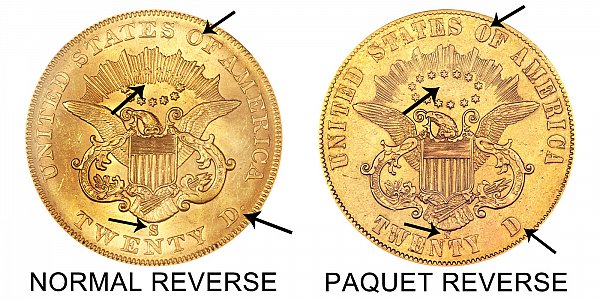 USA Coin Book Estimated Value of 1861-S Coronet Head Gold $20 Double Eagle (Paquet Reverse Variety) is Worth $43,565 in Average Condition and can be Worth $286,257 or more in Uncirculated (MS+) Mint Condition. Click here to Learn How to use Coin Price Charts. Also, click here to Learn About Grading Coins. The Melt Value shown below is how Valuable the Coin's Metal is Worth (bare minimum value of coin). Click here to see the Melt Value of every US Coin.