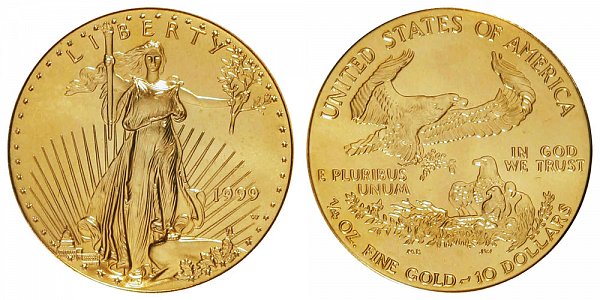 The 1999-W $10 Gold Eagle is a highly unusual and valuable coin. This coin is actually an uncirculated coin struck using unfinished (or unpolished) proof dies. It actually resembles the burnished uncirculated coins that would be produced years later. Before 2006: The "W" mint mark was typically only displayed on proof gold eagles and not the uncirculated ones - except in this case.

Sometimes these coins are known as "emergency issues". There was a massive demand for gold coins in 1999 due to uncertainty involving Y2K (a theory that most computers around the world would fail because their clocks could not support the year "2000"). Typically the $10 quarter ounce gold eagles were produced in volumes of around roughly 60000-70000 on average each year - but they produced over 560000 of them just for 1999. People wanted gold as a safeguard against a potential Y2K collapse and so the West Point Mint used their unpolished proof dies in a rush job to produce 10000 more coins to sell. Only the $5 tenth ounce gold eagle was produced using unfinished dies as well. The gold eagle demand and production dropped dramatically during the next year.