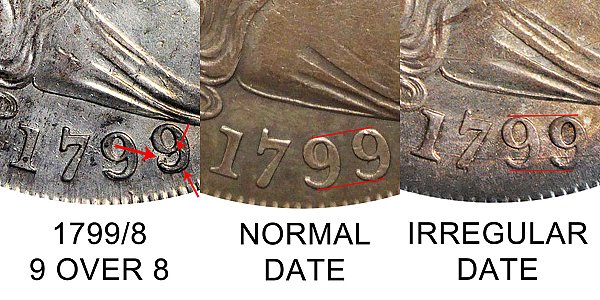 There are numerous varieties of the 1799 Draped Bust Silver Dollar - even more than are listed here. These varieties can be classified into 3 major varieties regarding the styling of the 1799 date. The first is the 1799/8 Overdate featuring a 1799 date struck over an 1798 date which resulted in the last 9 over an 8. Parts of the underlying "8" can be seen with and around the second "9" in the date - particularly towards the bottom portion. Another variety is simply the Normal Date without any errors or major features. The second "9" is positioned higher but is aligned just like the first "9". The last major variety is the Irregular Date - which features the second "9" positioned much lower and is aligned more towards the right (clockwise) relative to the first "9" - giving it an irregular appearance. Each of these major varieties is easy to identify and is depicted above in the example comparison image.

The 1799/8 overdate and irregular date varieties can be broken down and classified into two sub-varieties based on the number of stars above the eagle on the reverse of the coin. The first variety features the correct standard of 13 stars above the eagle. The other variety features 15 stars - which is actually an error. The engraver accidently placed 15 stars above the eagle - and later tried to correct the error by enlarging the size of the first and last clouds so they would cover up two of the stars. However: Two spikes from a star protrudes out of the left cloud and one spike from a hidden star protrudes out of the right cloud - indicating that there was 15 stars there. The difference between the 13 stars vs 15 stars reverse is depicted below in the example comparison image: 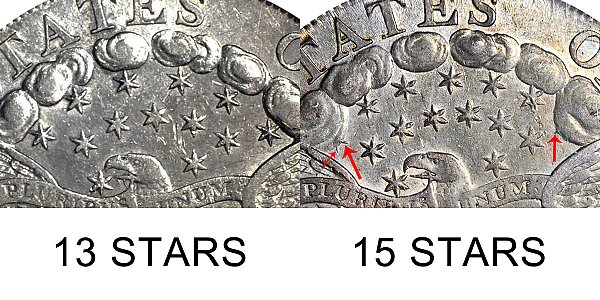 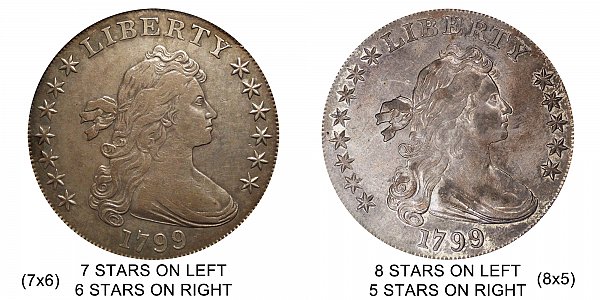 Lastly: The Normal Date 7x6 stars variety can be broken down into two more sub-varieties based on a branch in the eagle's claw on the reverse of the coin - and the number of berries on that branch. One variety features no berries at all while the other variety does have berries on the branch (there are even varieties based on the size these berries - but we do not list them here). The difference between the no berries vs with berries variety is depicted below in the example comparison image: 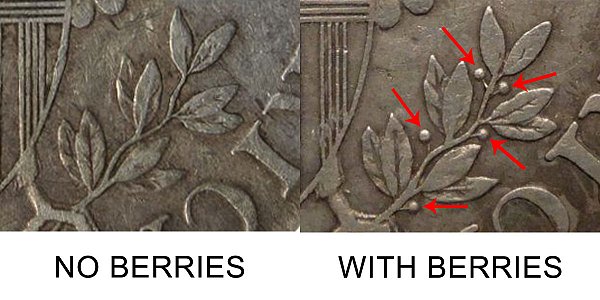