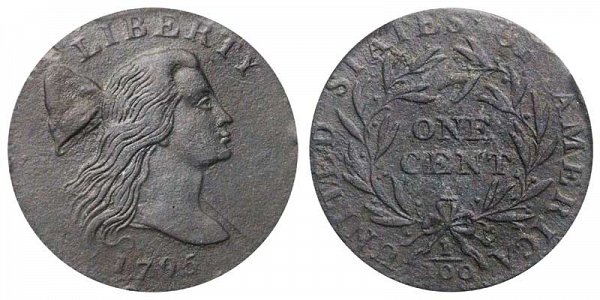 One major variety of the 1795 Liberty Cap Large Cent (Penny) features a "Jefferson Head" design on the obverse of the coin as depicted above. Source of example image is courtesy of Heritage Auction Galleries.

The design looks different than the typical liberty head design and very few of these coins are known to exist. Most numismatists agree that the "Jefferson Head Large Cent" wasn't even produced by the US Mint. Instead a man named John Harper produced these coins in 1795 in an attempt to win a lucrative contract with the US government to privately produce the US coinage. There was debate in this time period on whether the government should produce the coins or to have private contractors produce the coins. This particular variety has a lettered edge which features the words "ONE HUNDRED FOR A DOLLAR" along the edge of the coin as depicted in the example image below: