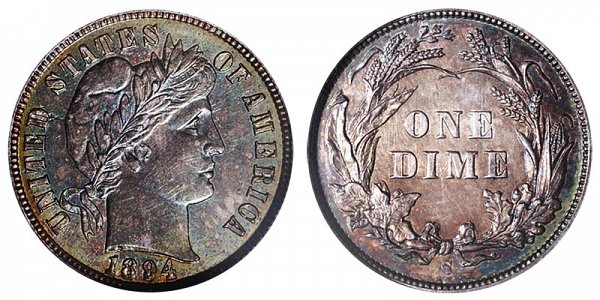 The 1894 S silver Barber Dime is one of the rarest and most valuable US coins ever made. During the early part of 1894 there were only 24 proof coins produced at the San Francisco mint that entire year. Only 9 of them are known to still exist. 7 of 9 are uncirculated and 2 are heavily worn. One of those circulated coins was found in an old junk box at Gimbels Department Store and purchased for only $2.40 in 1957.

The Mint's superintendent is said to have produced the coins as gifts to prominent bankers. The superintendent's daughter is also said to have received 3 of the rare barber dimes and spent one on ice cream and sold the other two decades later in the 1950s.

Each coin is worth between $1 Million and $2 Million - making it one of the most valuable and most sought-after collectible coins.