1809 Capped Bust Half Dollars : llll Between Words on Edge 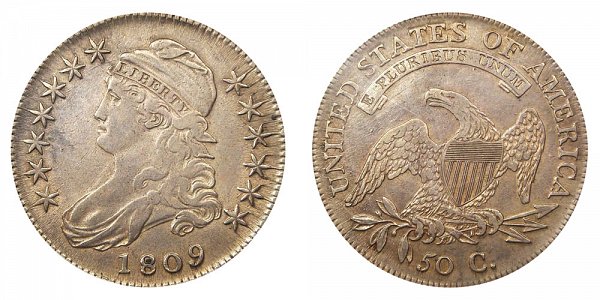 There were a few major varieties of the 1809 Capped Bust Half Dollar. This variety has an "III Edge" on the coin (sometimes known as "III" - "IIII" or "IIIII" to describe the visualization of the markings - not the count of "I"s though). All varieties feature the words "FIFTY CENTS OR HALF A DOLLAR" along the edge. The "III" Edge features the words but has special vertical "I" hashes between the words. This was an experimental design used for a short period in 1809 to try out different designs along the edge of the coin. An example of what the "III" variety looks like is depicted below. Source of example image is courtesy of NGC Coin:

USA Coin Book Estimated Value of 1809 Capped Bust Half Dollar (llll Between Words on Edge Variety) is Worth $124 in Average Condition and can be Worth $3,874 to $8,291 or more in Uncirculated (MS+) Mint Condition. Click here to Learn How to use Coin Price Charts. Also, click here to Learn About Grading Coins. The Melt Value shown below is how Valuable the Coin's Metal is Worth (bare minimum value of coin). Click here to see the Melt Value of every US Coin.

1809 Half Dollar: llll Between Words on Edge

1811 Half Dollar: All Varieties