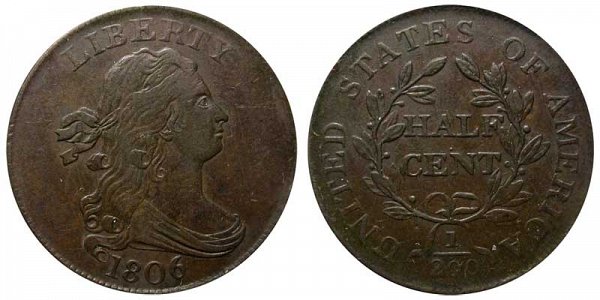 One major variety of the 1806 Draped Bust Half Cent (Penny) features a small "6" in the 1806 date on the obverse of the coin. The reverse of the coin also features no stems (stemless) at the bottom of the wreath.

Some rare sub-varieties of the small "6" variety will feature stems on the wreath on the reverse of the coin. The stemless reverse has larger numbers in the 1/200 fractional including a pointed "1" while the reverse with stems has smaller numbers and a blunt "1". The difference between the stemmed wreath vs stemless wreath is depicted below in the example comparison image: