1804 Draped Bust Half Cents : All Varieties 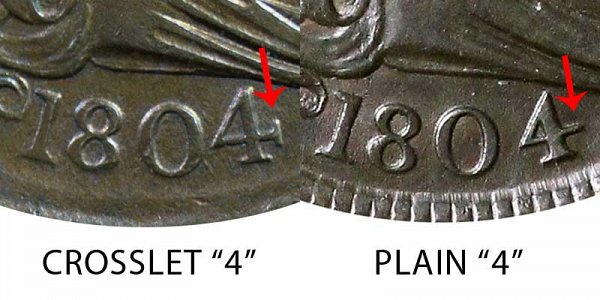 There are numerous combinations of varieties of the 1804 Draped Bust Half Cent (Penny). Two major varieties feature either a crosslet "4" or plain "4" style within the 1804 date. The crosslet "4" has a small vertical line crossing through the right-side end of the "4" while the plain "4" does not. The differences between the crosslet "4" vs plain "4" are depicted above in the example comparison image.

Two other major varieties deal with the reverse of the coin. One variety features two stems at the bottom of the wreath while the other is stemless (no stems). The difference between the "with stems" vs "no stems" varieties are depicted below in the example comparison image of the coins: 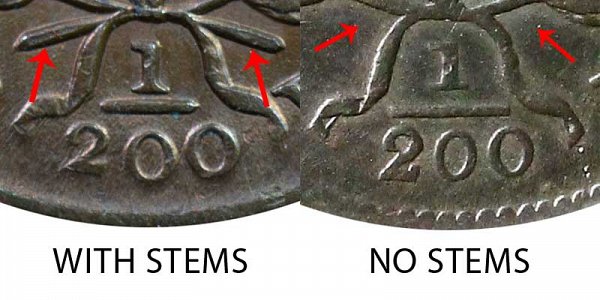 There are 4 major varieties consisting of combinations of the above features. One other major variety is known as the "spiked chin" variety. This coin features a protrusion or a spike extending from the liberty head's chin due to a die defect - as depicted by the arrow below. In addition: ripples or wave-like features appear below the chin within the background as depicted within the circle below in the example image of this coin variety: 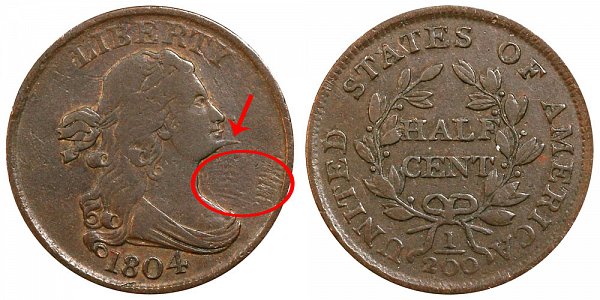