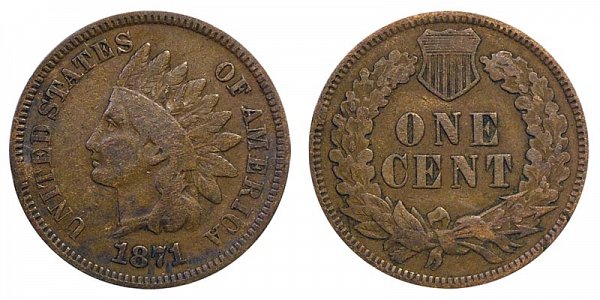 The 1871 Indian Head Cent (Penny) had two major varieties for the reverse of the coin and the one depicted above in the example image is the "Bold N" variety.

The "Bold N" variety used a newer die and hub that would be used as the newer style on all later Indian pennies. This resulted in a deeper bolder "N" that didn't "sink" 3-dimensionally into the background. The letter "E" had triangular curved "trumpet" or "horn" shaped serifs and the notches on the letters were smaller. These features are depicted by the arrows on the right side of the example image of this penny below:

USA Coin Book Estimated Value of 1871 Indian Head Penny (Bold N Variety) is Worth $89 in Average Condition and can be Worth $578 to $865 or more in Uncirculated (MS+) Mint Condition. Proof Coins can be Worth $353 or more. Click here to Learn How to use Coin Price Charts. Also, click here to Learn About Grading Coins. The Melt Value shown below is how Valuable the Coin's Metal is Worth (bare minimum value of coin). Click here to see the Melt Value of every US Coin.