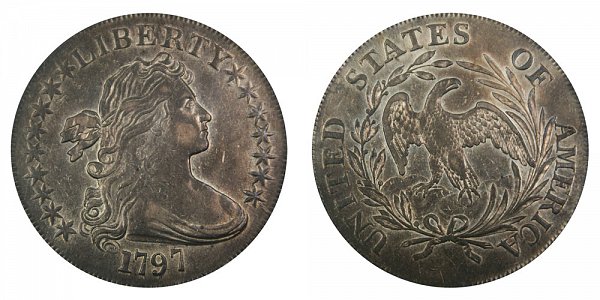 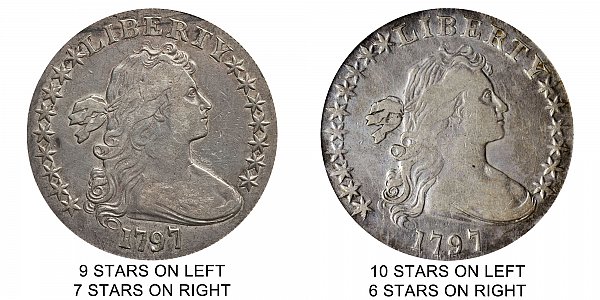 There are also two major varieties for the reverse of the coin - specifically the size of the letters in the words "UNITED STATES OF AMERICA". One variety features small letters which are further away from the rim while the other features larger letters much closer to the rim with less spacing. Identifying and distinguishing the differences between these varieties is extremely easy. The difference between the 1797 Small Letters vs Large Letters Draped Bust Silver Dollar is depicted below in the example comparison image: 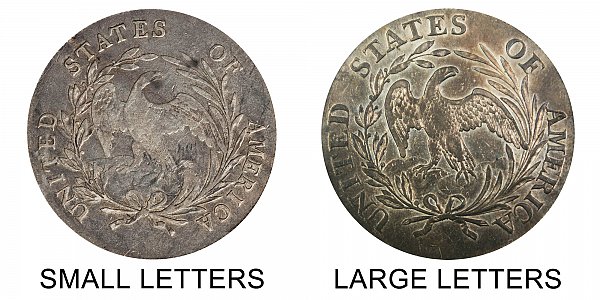 USA Coin Book Estimated Value of 1797 Draped Bust Silver Dollar (9 Stars Left - 7 Stars Right - Large Letters Variety) is Worth $2,229 in Average Condition and can be Worth $70,164 or more in Uncirculated (MS+) Mint Condition. Click here to Learn How to use Coin Price Charts. Also, click here to Learn About Grading Coins. The Melt Value shown below is how Valuable the Coin's Metal is Worth (bare minimum value of coin). Click here to see the Melt Value of every US Coin.