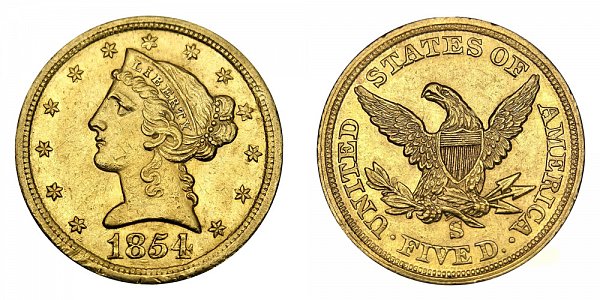 The 1854-S $5 Liberty Head Gold Half Eagle is one of the rarest and most valuable US gold coins ever made. Only 268 of these coins were originally produced and only 3 are known to exist today in collection. This was also the first year that the $5 Half Eagle coin was produced in San Francisco. There is no great explanation as to why these coins were so rare. One theory is the acid used to refine gold was scarce in San Francisco at the time - which resulted in less gold available - although this doesn't account for the normal number of gold dollars -$10 Eagles and $20 Eagle coins produced by the mint that same year. Nearly all of these 268 coins were immediately exported after production once they went into circulation and most disappeared.

There are three 1854-S half eagle gold coins that exist today. The Boyd coin first appeared in 1945 and was discovered by collector F.C.C. Boyd. The second coin is known as the Wolfson coin and was discovered by Texas dealer B. Max Mehl. This coin eventually ended up being acquired by Samuel W. Wolfson (hence the name of the coin). The third and final coin is known as the Newcomer coin which became known in 1919 and was sold to Waldo C. Newcomer. It passed through a number of owners - including B. Max Mehl who also owned the Wolfson coin at one time - and even King Farouk of Egypt. Eventually this coin and other gold coins were given to the Smithsonian Institute by the Josiah K. Lilly Collection as numismatic items for the museum. This is also the same coin depicted above. Source of example image is courtesy of the National Numismatic Collection of the Smithsonian Institute.